Who are the loyalists in Northern Ireland and why are they rioting?

Politicians from across the spectrum have condemned the ongoing outbreak of violence in Northern Ireland following another night of chaos in the province.

Boris Johnson said he was “deeply concerned” by further scenes of rioting, and leaders at the Stormont Assembly have been recalled early to discuss the unrest in mainly loyalist areas.

Wednesday night saw a bus hijacked and set on fire and a press photographer assaulted in Belfast, following attacks on police officers and petrol bombings on the streets over the past week.

Many people assumed the success of the peace process in 1990s meant sectarian violence in Northern Ireland was a thing the past. So who is causing the current disorder? And why exactly has it flared up now?

The recent violence can be attributed to several factors, but at its heart is anger among loyalists – staunch supporters of the union between Great Britain and Northern Ireland – at post- Brexit trading arrangements which have created a series of economic barriers.

For loyalism, the Northern Ireland Protocol appears to have undermined their place in the union, and tensions have been simmering since the consequences of exiting the EU became a reality at the start of January.

One event last week lit a match to the powder keg. The announcement by prosecutors that no action would be taken against 24 Sinn Fein politicians for attending a large Irish republican funeral during the pandemic sparked outrage among some loyalists.

The funeral of former IRA leader Bobby Storey last June hardened a long-standing view by some loyalists that the institutions of the state give preferential treatment to republican leaders.

They pointed to police engagement with the Sinn Fein funeral organisers prior to an event that saw around 2,000 people mourn Storey on the streets of west Belfast when strict curbs on public gatherings were in place.

In several loyalist areas of Belfast and Derry – largely Protestant, working class and still living with the influence of paramilitary gangs – teenagers and young men have come up onto the streets for sporadic rioting.

There have also been bouts of disorder within the largely Catholic areas in recent days. Youths on both sides of a west Belfast peace wall, linking the Shankill Road with the Springfield Road, threw petrol bombs and other missiles at each other on Wednesday night. 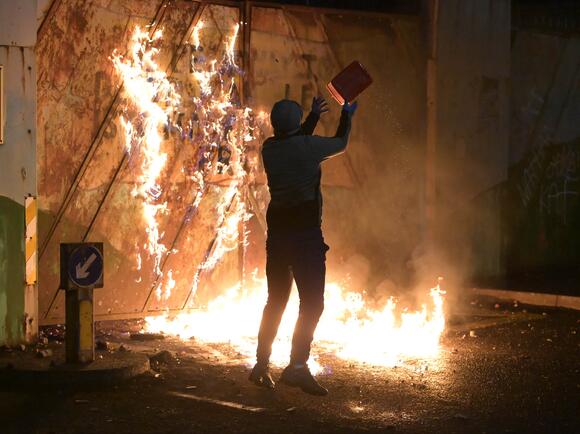 The unionist parties have been fiercely critical of the (PSNI), calling for chief constable Simon Byrne to resign. DUP leader and first minister Arlene Foster has said she will no longer engage with Mr Byrne.

Non-unionist parties have accused Ms Foster and others of stoking up tensions – not only in relation to the Storey funeral but also over Brexit and the Irish Sea border.

Ms Foster has also been condemned by the non-unionist parties for meeting a representative group for loyalist paramilitary groups over the protocol in February.

She said she had “listened to the views expressed” by the Loyalist Communities Council, which represents a series of groups including the UVF, UDA and Red Hand Commando.

Her DUP colleague Sammy Wilson has refused to apologise for using violent metaphors, after saying unionists would wage “guerrilla warfare” against the protocol. 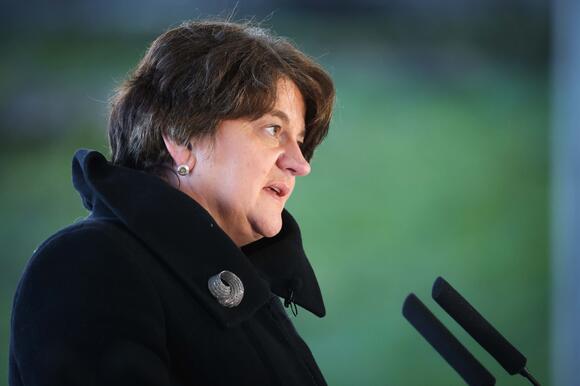 Police suspect paramilitary elements are involved in much of the violence seen across the region in recent days, either directly or by orchestrating young people to riot on their behalf.

However, in the Newtownabbey and Carrickfergus areas an added factor is at play.

In those areas, the PSNI believes paramilitary involvement is less motivated by Brexit or the Storey funeral and more to do with a rogue faction – the South East Antrim UDA – reacting to recent police operations targeting its activities.

PSNI assistant chief constable Jonathan Roberts said on Thursday it was clear there was “a degree of organisation” behind the recent violence.

“It’s [too] early to indicate whether or not any proscribed organisations were involved but it is our assessment that is a likely situation.”

Petrol bombs and bricks hurled at police in third night of violence in Northern Ireland Police are under attack with Bottles, bricks and fireworks during ‘Brexit’ clashes in Belfast Police clash with ‘Kill the Bill’ protesters as thousands march across England Bus torched in Belfast on sixth night of unrest in Northern Ireland What happened to Blessing Olusegun? Here’s what you can do if you’re angry about the government, without smashing up Bristol How defunding the police backfired in Minneapolis, the city which sparked George Floyd protests across the world
2021-04-08
Previous Post: Breakout Bridgerton Star Allegedly Denied Role Due to Race
Next Post: 5 important things we learned about COVID vaccines today