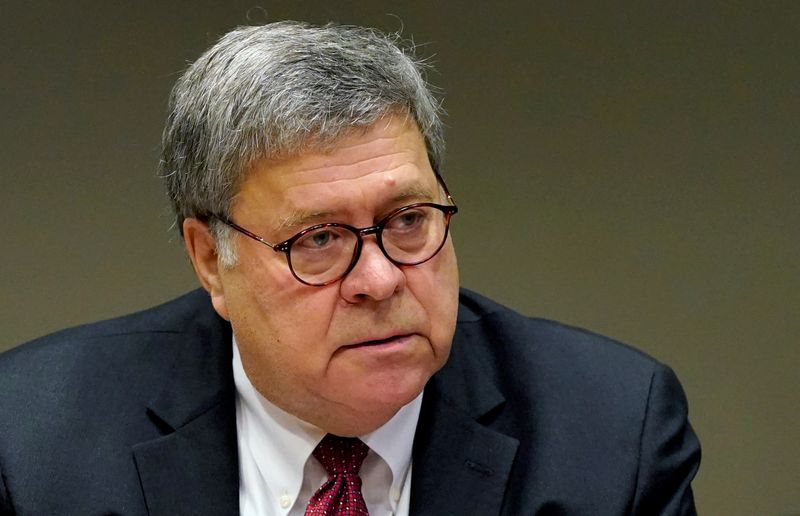 WASHINGTON (Reuters) – A recently retired federal prosecutor in California on Thursday became the third career Justice Department official to claim in a recent newspaper letter or op-ed that Attorney General William Barr has politicized the department.

Phillip Halpern, a 36-year department veteran who prosecuted Republican former Representatives Duncan Hunter and Randy Cunningham in California, criticized Barr in the print edition of San Diego Union-Tribune on Thursday and said he had resigned.

“Confirming his scorn for honest apolitical prosecutors, Barr refers to some as ‘headhunters’ who pursue ‘ill-conceived charges against prominent political figures,'” Halpern wrote in the piece, which first appeared in the online edition late on Wednesday.

A Justice Department spokeswoman did not respond to a request for comment.

Halpern is the latest career prosecutor to air his grievances against Barr, who has faced accusations he has undermined the independence of the Justice Department in an effort to help President Donald Trump win re-election in November.

James Herbert, a prosecutor in Boston, wrote a letter to the Boston Globe on Sept. 24, saying that Barr “has done the president’s bidding at every turn,” while Seattle-based federal prosecutor Michael Dion chimed in with a letter on Oct. 6 to the Seattle Times: “Barr … is turning the Justice Department into a shield to protect the president and his henchmen.”

Herbert and Dion, who are still employed with the department, declined to comment beyond their letters.

Halpern in an interview with Reuters called himself a “reluctant spokesperson.”

Barr has faced criticism for intervening in prosecutions against several of Trump’s political allies, including by recommending a lighter sentence for Roger Stone and seeking to dismiss a false-statement charge against former Trump adviser Michael Flynn.

He has also repeated Trump’s claims, without evidence, that there could be widespread mail-in voting fraud in November, and he has supported the Trump administration’s aggressive use of federal agents to quell violence in cities like Portland following the death of George Floyd.

His handling of the Stone case prompted all four career prosecutors handling the case to withdraw in protest.

The spate of letters “underscores the degree to which this attorney general, more than any other in our recent times … has politicized and overtly politicized the department’s work,” said Kristy Parker, a former federal prosecutor who is now with Protect Democracy.