Arsenal manager Mikel Arteta says he gave former Germany playmaker Mesut Ozil “as many opportunities” as he could before leaving the 32-year-old out of his Premier League and Europa League squads. (Sky Sports)

Manager Carlo Ancelotti insists 20-year-old striker Moise Kean will be back next season to rejoin Everton after his loan with Paris St-Germain finishes. (Liverpool Echo)

England manager Gareth Southgate is set to recall Manchester United left-back Luke Shaw, 25, to his international squad, having not selected him since March 2019. (Star)

Wales and Spurs star Gareth Bale has donated £15,000 to fund 300 Christmas hampers to feed those most in need in Wales. (Wales Online)

Arsenal’s director of football operations Huss Fahmy is to leave the club after three years with the Gunners. (Standard)

Newcastle United are identifying transfer targets for the next two transfer windows, with manager Steve Bruce hoping the club’s scouting team will eventually be able to watch these players in the flesh, despite the Foreign Office warning against non-essential overseas travel during the coronavirus pandemic. (Chronicle)

Derby County are on the brink of a takeover by Sheikh Khaled bin Zayed Al Nehayan of Abu Dhabi, a cousin of Manchester City owner Sheikh Mansour. (Telegraph- subscription required)

Captain Barry Bannan is keen to sign a new Sheffield Wednesday contract and the 30-year-old midfielder, targeted by Brentford, would want to stay even if the Owls are relegated this season. (Yorkshire Post) 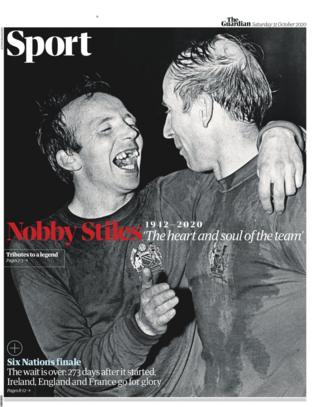