Juventus are planning a £360m move for Paris St-Germain forward Kylian Mbappe, 21, and the Serie A side could send Cristiano Ronaldo the other way. (Mirror)

German club Borussia Dortmund are not prepared to sell 20-year-old England winger Jadon Sancho, who was linked with Manchester United during the summer, in the January transfer window. (Sport Bild, via Mail)

And Chelsea were apparently willing to pay Barcelona forward Lionel Messi, 33, £1m a week in a £225m transfer in 2014. (Sky Sports)

Middlesbrough are attempting to complete a deal to sign winger Yannick Bolasie, 31, on loan from Everton. (Sky Sports)

Manchester United midfielder Bruno Fernandes, 26, has denied criticising manager Ole Gunnar Solskjaer and his team-mates when they were thrashed 6-1 by Tottenham prior to the international break. (Sport TV, via Metro)

Derby County owner Mel Morris says manager Phillip Cocu will not be sacked if the Rams lose to Watford on Friday as he also denied reports linking ex-England striker Wayne Rooney, 34, with replacing the Dutchman. (Talksport) 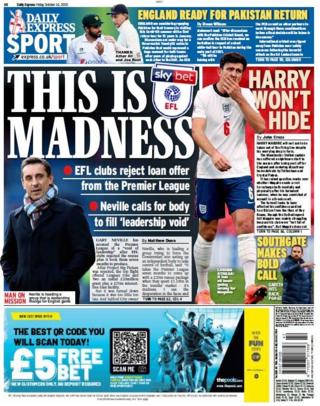