Borussia Dortmund’s sporting director Michael Zorc says he can see Norway striker Erling Braut Haaland at the club “for a long time”. The 20-year-old is contracted to the Bundesliga side until 2024, but could leave for 75m euros (£67m) in 2022 because of a release clause. (Bild Sport – in German)

Argentina left-back Nicolas Tagliafico, who has been linked with Chelsea and Manchester City, has agreed a contract extension with Ajax which is expected to see the 28-year-old stay at the Dutch club until the end of the season at least. (De Telegraaf – in Dutch)

Premier League clubs have been told to reduce the number of fans allowed back into grounds to 1,000. Sports Ground Safety Authority guidance says test events must take place before 2,000 are permitted. (Telegraph – subscription only)

Fulham goalkeeper Marcus Bettinelli, 28, is attracting interest from several Premier League clubs. The 28-year-old, who is on loan at Middlesbrough, was called into the England squad by Gareth Southgate in 2018. (Mail)

English winger Angel Gomes, 20, says he left Manchester United ‘for a fresh start’ after rejecting their offer to instead join Lille in the summer.(Independent)

AC Milan’s technical director Paolo Maldini admits interest in France winger Florian Thauvin, 27, who is out of contract at Marseille in the summer of 2021. (Telefoot, via Football Italia)

The backroom staff at Gimnasia y Esgrima – the club Diego Maradona managed when he died – have resigned from their positions. (Mail)

Maradona’s friend and lawyer Angelo Pisani feels it would have been better for the 60-year-old to have been in Naples, close to Napoli fans, rather than his native Argentina when he died.(Mail) 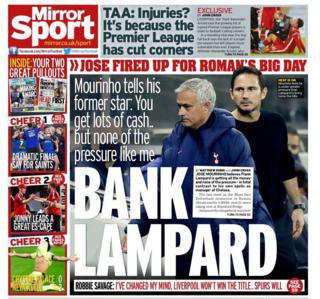 The back page of the Mirror