Barcelona and Real Madrid may be priced out of a deal for Borussia Dortmund and Norway striker Erling Braut Haaland. The 20-year-old wants a salary of 35m euros (£30m) a year. (Goal)

Manchester United are ready to step up their interest in Fiorentina and Serbia defender Nikola Milenkovic, but the Italian side want at least £38m for the 23-year-old. (Sun)

Paris St-Germain are putting pressure on Kylian Mbappe to sign a new deal, but the France forward, 22, does not want the contract to be too long. (L’Equipe – in French)

Everton manager Carlo Ancelotti says the club are “open” to selling 21-year-old Italy striker Moise Kean, who is on loan at PSG. (Mail)

Real Madrid are not prepared to sell 22-year-old Norway midfielder Martin Odegaard, who is on loan at Arsenal until the end of the season. (Marca)

West Ham are hopeful they will be able to sign Arsenal and England Under-21 striker Eddie Nketiah, 21, this summer. (Evening Standard)

Wolves will try to sign Benfica’s Brazilian forward Carlos Vinicius this summer after Tottenham chose not to make the 26-year-old’s loan permanent. (TVI24 – in Portuguese)

Manchester United and Arsenal have been linked with France’s 18-year-old midfielder Eduardo Camavinga, who has decided not to extend his contract at Rennes. (Marca)

Manchester United want to sign 24-year-old Fulham and Denmark defender Joachim Andersen, who is on loan at Craven Cottage from Lyon. (B.T – in Danish)

Bayern Munich are considering Massimiliano Allegri as manager Hansi Flick’s potential replacement. Allegri has been without a role since leaving Juventus in 2019. (Sport Mediaset – in Italian)

Sassuolo and Italy midfielder Manuel Locatelli says he would consider a move abroad. The 23-year-old has been linked with Manchester City. (Corriere dello Sport – in Italian)

Watford are set to offer former winger Ashley Young, 35, a one-year deal if they are promoted back to the Premier League. The English player’s contract at Inter Milan runs out this summer. (Mail)

Barcelona are considering a move for RB Leipzig and Spain striker Dani Olmo, 22, who played at the Catalan club’s academy. (Sport)

Atletico Madrid are interested in 19-year-old Italian midfielder Nicolo Rovella, who is on loan at Genoa from Juventus, plus Udinese’s Argentine right-back Nahuel Molina, 23. (Mundo Deportivo – in Spanish) 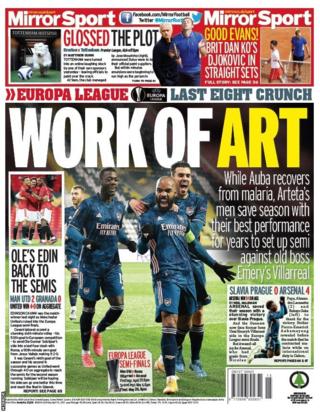 The back page of Friday’s Mirror