Alternatively, sources at United have rubbished the link with Dembele. (Mirror)

Barcelona’s French defender Jean-Clair Todibo, 20, is on a list of centre-backs Everton are considering as they look to secure a loan signing before the transfer deadline. (Liverpool Echo)

Borussia Dortmund remain adamant England winger Jadon Sancho, 20, will not be leaving the club during the summer transfer window, despite consistent links with Manchester United. (Independent)

Chelsea’s Germany defender Antonio Rudiger, 27, is considering his future at the club after being left out of the first team. (Sky Sports)

And 19-year-old England winger Callum Hudson-Odoi’s future is also in doubt at Stamford Bridge. (The Guardian)

Bayer Leverkusen’s German defender Jonathan Tah, 24, is a on a list of potential targets for Leicester City.(Kicker – in German)

The Foxes have had a €32m (£29.5m) offer for French centre-back Wesley Fofana, 19, rejected by Saint-Etienne. (L’Equipe via Leicester Mercury)

Manchester United and England midfielder Jesse Lingard, 27, will not be joining Tottenham despite being linked with a move. (Athletic – via Twitter)

The Red Devils are considering taking up a one-year option to extend Lingard’s contract in order to protect his £25m valuation. (Sun)

Wales winger Daniel James, 22, is not likely to leave Manchester United this summer, despite being linked with Leeds United. (Manchester Evening News)

Blackburn Rovers are keen to secure loan moves for English defenders Tyler Magloire, 21, and Hayden Carter, 20 before the 16 October deadline, but both have picked up injuries which puts that in doubt. (Lancashire Telegraph) 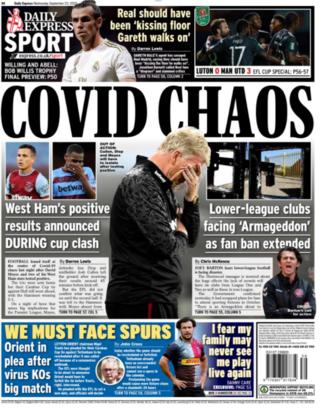