Manchester City remain interested in signing Barcelona’s Lionel Messi when his contract expires next summer – and a spell with New York City FC in the United States could also tempt the 33-year-old Argentina forward. (Mundo Deportivo – in Spanish)

Aston Villa and England midfielder Jack Grealish, 25, has moved to the top of City’s list of transfer targets, while the Etihad Stadium club are also considering whether to trigger a £25m buy-back clause for Villa’s 22-year-old Brazilian midfielder Douglas Luiz. (Daily Star on Sunday)

Ajax director of football and former Arsenal winger Marc Overmars says he is ready for a new challenge alongside the Dutch club’s chief executive Edwin van der Sar, the former Manchester United goalkeeper. The pair are linked to a possible switch to United. (Sunday Mirror)

Manchester United have been told by defender Eric Bailly’s representatives that the 26-year-old Ivory Coast international may need to “assess” his future if his Old Trafford situation does not improve. (Calciomercato – in Italian)

Some Manchester City fans believe a short-term move for their 34-year-old Bosnian former forward Edin Dzeko, who now plays at Roma, could be a wise decision when the transfer window reopens in January. (Manchester Evening News)

Juventus are leading the race for Bayern Munich’s 28-year-old Austria defender David Alaba, whose contract runs out next summer. (Tuttosport – in Italian)

Crystal Palace are looking at Chelsea and Spain left-back Marcos Alonso, 29, as an option if Netherlands defender Patrick van Aanholt, 30, does not extend his deal with the Eagles beyond the end of this season. (Mail on Sunday)

Everton’s Ivorian midfielder Jean-Philippe Gbamin, 25, could leave the club on loan in January after failing to make an impact at Goodison Park. (Football Insider)

Southampton may look to sell Mohamed Elyounoussi to Celtic, with the 26-year-old Norwegian forward in his second spell on loan at the Scottish club. (Hampshire Live)

The English Football League has placed a number of clubs under a transfer embargo after they took out a bridging loan with the governing body. (Mail on Sunday) 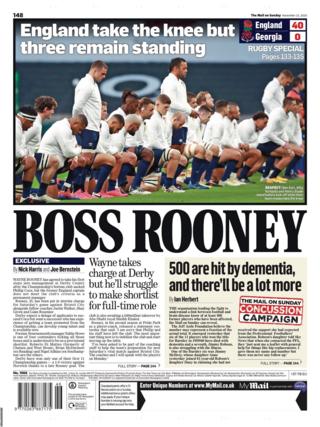 END_OF_DOCUMENT_TOKEN_TO_BE_REPLACED

CNR: West Ham can’t afford to carry passengers, Chelsea man has too much to prove