The Treble: Cavani the difference, WBA revival, Spurs too strong

By: climaxnews
In: Local News
Tagged: Cavani, Treble
With: 0 Comments 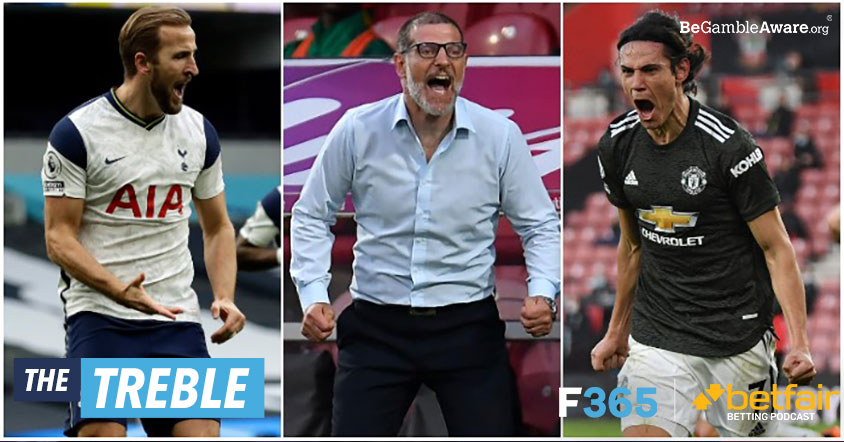 Every week we preview three fascinating things to look out for in the big Premier League games, with further analysis from Betfair’s Football…Only Bettor podcast.

Cavani making the difference against in-form West Ham
David Moyes has done brilliantly to lift West Ham to fifth in the Premier League table following a third consecutive victory in Monday’s 2-1 win against Aston Villa. But a closer look at their fixture list and recent performances suggest the table is lying a little bit – and Manchester United, inspired by Edinson Cavani, ought to be able to collect three points at the London Stadium.

Villa were much the better team on Monday, ‘winning’ the xG battle 2.39 – 0.57, as Jack Grealish repeatedly poked holes in the West Ham defence. Moyes’ side were pinned back for long periods and struggled to really assert themselves, neither sitting in a particularly well-compressed formation nor confronting Villa higher up the pitch.

Their previous two games were tight 1-0 wins against Fulham and Sheffield United. Perhaps the Hammers aren’t quite as good as the table suggests.

Ole Gunnar Solskjaer is yet to show he has the tactical capacity to really coach United into a coherent and consistent unit, but frankly that isn’t always needed. Sometimes – in fact, in a campaign riddled with injuries and fatigued players, quite often – just having the better players is enough to win out.

Edinson Cavani’s superb movement in the penalty area at Southampton showed the impact he can have against teams forced back by the sheer talent in the United attack. West Ham, then, will most likely be caught napping on occasion and fail to cover all of the spaces as Bruno Fernandes, Luke Shaw and Marcus Rashford put testing balls in towards the Uruguayan.

From Betfair’s Football…Only Bettor podcast: “United had a tough game against PSG on Wednesday and face another against Leipzig next Tuesday. United are inconsistent and are not a bet at the price. West Ham deserve respect for their recent form. They’re underrated and I’m happy to back them to avoid defeat.”

Rare chance for Baggies to build momentum
A huge 1-0 win over Sheffield United last weekend has potentially kick-started West Brom’s campaign. Slaven Bilic’s side are finally off the mark and within touching distance of both Fulham and Brighton, two teams sitting outside the relegation zone at the quarter-mark of the season. It would be naïve, given the unpredictability we’ve already seen in 2020/21, to rule the Baggies out of an unlikely survival.

The early kick-off on Sunday offers West Brom a very rare opportunity to build some momentum, too. Crystal Palace have lost each of their last two, against Burnley and Newcastle, without scoring a single goal, and while they will probably welcome Wilfried Zaha back after a period of isolation, he has not been able to train with the first team. When Zaha isn’t fit and firing, Palace don’t win.

Encouragingly, West Brom have only conceded five goals in their last six games, reflecting a much-improved defensive showing since Branislav Ivanovic came into the side as the middle centre-back. A half-fit Zaha, then, is unlikely to cause the hosts too many problems.

It’ll be a tight and low-scoring game, but with confidence on their side the Baggies could snatch the points.

Spurs continuing to turn up the pressure on Arteta
Until recently it seemed certain Mikel Arteta would be given time to get back on track at Arsenal, but some poignant headlines over the last week might suggest otherwise. First, defeat to Wolves meant Arteta had overseen the club’s worst start to a league campaign in 38 years. Worse still, the one-year anniversary of Unai Emery’s departure meant the papers were filled with unflattering comparisons between the two managers.

Arteta has won 43% of his league games compared to Emery’s 49%, and those graphics could hardly have come at a worse time for the Arsenal manager given how eerily similar his team looked – blunt, directionless – in a 4-2-3-1 against Wolves on Sunday. And as the media began to pull at the thread this week, Arteta has talked himself into trouble no less than three times, first ominously saying he is ‘not worried’ about talk of being dismissed and then, somewhat alarmingly, admitting he needs ‘five or six’ new players before he can use his preferred 4-3-3.

To cap off a difficult week of PR, Arteta was widely mocked on social media for comments about his side’s high volume of crosses attempted against Wolves, sounding a little bit more hit-and-hope than tactical genius. Being ridiculed for losing sight of Arsenal’s playing style, however unfair, is a sign that the tide is turning against him.

It would be ridiculous to get rid of Arteta, but that does not mean it won’t happen – and if he keeps providing clumsy soundbites the pressure will continue to build.

Defeat to Tottenham in the north London derby wouldn’t exactly help. Arsenal badly lack creativity at the moment – playing as individuals in the final third, bereft of confidence – which means Jose Mourinho should be capable of organising Tottenham to keep their rivals at arms’ length.

At the other end, Harry Kane always seems to score against Arsenal, and after comfortably beating Manchester City 2-0 at home last month Spurs will be confident of unlocking an Arsenal defence that was repeatedly pierced on the counter-attack by Wolves. The Gunners look set to extend their Premier League winless run to four.

From Betfair’s Football…Only Bettor podcast: “Spurs are too short. One or two of their players could pick up a knock in their Europa League away match on Thursday night and, while Arsenal are involved in that competition too, they’re at least at home. Early lay on Spurs is my bet. I won’t be backing them at the price.”