The boldest Mars missions in history 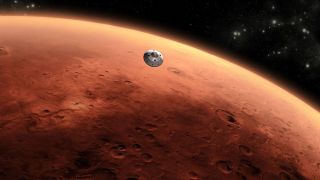 Artist’s concept of NASA’s Curiosity rover approaching Mars. Curiosity is slated to land on the Red Planet in August 2012.

Humanity has been sending spacecraft to Mars since the Soviet Union launched Marsnik 1 on Oct. 10, 1960 (though the craft failed to reach its goal). To mark the upcoming Red Planet arrival — NASA’s Perseverance rover — Space.com has taken a look back at some of the most spectacular successes (and failures) in humanity’s bid to reach the Red Planet.

The Soviet Union launched the Mars 2 Orbiter on May 19, 1971. The spacecraft arrived at Mars and released its lander on November 27, 1971. Unfortunately, the lander crashed onto the Martian surface. However, it still represents the first human-made object on Mars.

NASA’s Viking 1 and Viking 2 spacecraft each consisted of an orbiter and lander. Viking 1 launched on Aug. 20, 1975, and after a month of searching for landing sites, sent the Viking 1 Lander to the surface of Mars on July 20, 1976 — the first successful landing on Mars. Viking 2 spacecraft launched Sept. 9, 1975, and its lander touched down on Sept. 3, 1976.

The Viking craft proved to be a huge success, and provided the most complete view of Mars at the time, producing over 50,000 photos of the planet.

NASA launched the Pathfinder spacecraft on Dec. 4, 1996, and it arrived at Mars on July 4, 1997. Sojourner Rover emerged from Pathfinder on July 6, making it the first wheeled vehicle on Mars. Sojourner was the first rover to operate on another planet. Only two feet in length (63 cm), the rover possessed six wheels. The final contact with Pathfinder was on Sept. 27, 1997.

Japan launched the Nozomi spacecraft, the nation’s first planetary mission, on July 4, 1998. The orbiting mission was designed to study the Martian upper atmosphere and its interaction with the solar wind. However, on December 20, 1998, a malfunctioning valve left the spacecraft unable to head to Mars as planned.

An amended plan to reach Mars also failed, and efforts to save the mission ended on Dec. 9, 2003. In the words of the Japan Aerospace Exploration Agency: “NOZOMI became an artificial planet that flies forever in orbit around the sun near that of Mars.”

The 2001 Mars Odyssey spacecraft launched on April 7, 2001. It arrived in orbit around Mars on October 24, 2001. Its planned mission ended in 2004, but it continues in operation at the time of this writing and remains NASA’s longest-operating spacecraft at Mars. It broke the record for the longest-serving spacecraft at Mars on Dec. 15, 2010.

NASA’s golf cart-size Spirit and Opportunity Rovers launched to Mars in 2003 and used giant airbags to cushion their landings in January 2004. The amazingly long-lived rovers far outstripped their planned missions of 90 Martian solar days. Spirit plugged away until April 2009, when it got stuck in deep sand. It went silent on March 22, 2010 and was declared dead a year later.

Opportunity is also no longer in commission. But, while the rover was supposed to last just 90 days on the Red Planet’s surface, it lasted an incredible 5,111 days until its last transmission. The rover lasted from 2004 up until the middle of 2018 when it lost communication after a global dust storm.

The European Space Agency (ESA) launched its first planetary explorer, the Mars Express spacecraft, on June 3, 2003. On Dec. 19, 2003, the Beagle 2 Lander was released. Unfortunately, contact with the lander was broken and it was subsequently declared lost. Mars Express orbiter completed its mission in 2005, and continues to operate at the time of this writing, providing many images from its High Resolution Stereo Camera (HRSC).

NASA’s Phoenix lander launched on Aug. 4, 2007, and landed near the Martian north pole on May 25, 2008. It completed its mission, including verifying the presence of water-ice in the Martian subsurface. However, the lander was not designed to withstand a polar Martian winter. The mission ended on May 24, 2010.

NASA’s Mars Reconnaissance Orbiter (MRO) lifted off on Aug. 12, 2005, and arrived at the Red Planet in March 2006. It completed its two-year primary science phase, and is in the extended phase of its mission, where it continues to return copious amounts of information.

2020-07-15
Previous Post: US launches 4 secret spy satellites to orbit
Next Post: ‘A Day in Space’: How to watch the National Space Society’s virtual event Thursday