Tweet
Share
Share
Pin
On Sunday, actress Samantha Akkineni shared a screenshot of a post that claims that the NCB has denied making a list of Bollywood celebrities in connection with the ongoing drug probe in which Rhea Chakraborty and several others were arrested. This came after a news channel reported that Rhea named Sara Ali Khan and Rakul Preet Singh as consumers of drugs. When the NCB reportedly denied this claim, several netizens took to their social media handle to apologise to the two actors. Sharing the post, Samantha wrote, “#SorryRakul, #SorrySara.” 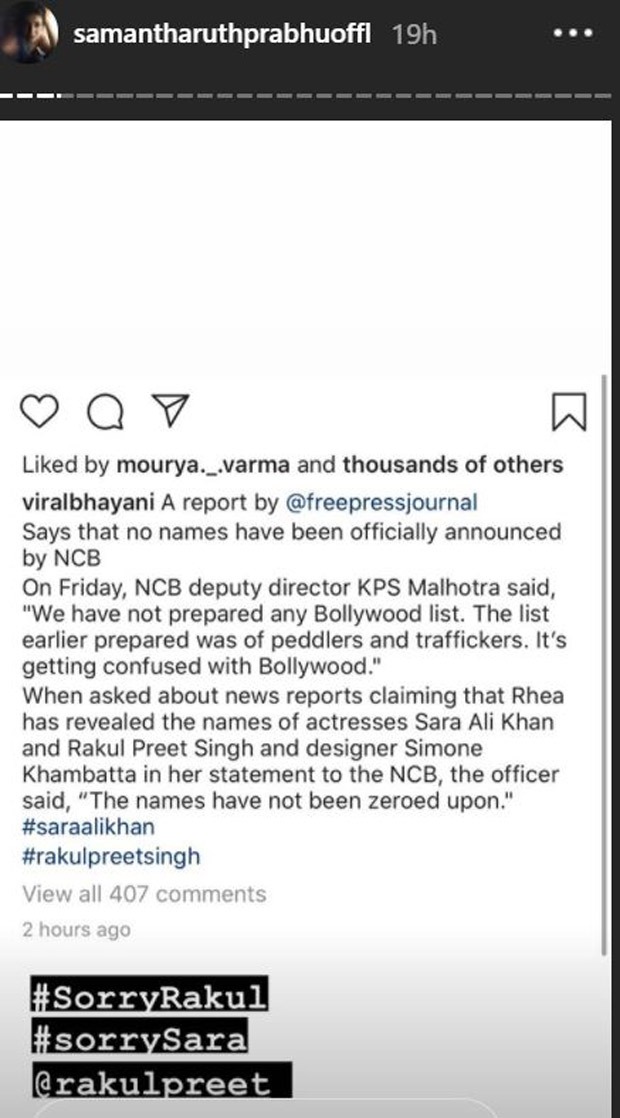 An english news channel had earlier reported that Rhea named Sara Ali Khan, Rakul Preet Singh and designer Simone Khambatta among others as drug consumers. The report also claimed that the NCB has prepared a list of 25 Bollywood names who would be summoned for questioning. Another news channel reported that casting director Mukesh Chhabra and Sushant’s former manager Rohini Iyer were also named in the list.

According to reports, NCB deputy director KPS Malhotra said, “We have not prepared any Bollywood list. The list earlier prepared was of peddlers and traffickers. It’s getting confused with Bollywood. The names have not been zeroed upon.”

2020-09-14
Previous Post: Why celebrities, big corporations and Barack Obama want you to be a poll worker
Next Post: Tiffany Haddish used to ‘dress like a man’ to be part of comedy ‘boys’ club’