Scotland are now thriving because the players are more willing to “bail each other out”, says forward Ryan Fraser.

Steve Clarke’s side beat the Czech Republic on Wednesday to go eight games unbeaten – their best run in 32 years.

Scotland face Serbia next month in a Euro 2020 play-off – a chance to reach a first finals since 1998 – and Fraser says the side can “achieve anything”.

“Maybe before we were looking after ourselves,” said the Newcastle player, who scored the only goal at Hampden.

“But now we’ve got that morale and togetherness that if someone makes a mistake you bail them out because they will bail you out next time.

“There’s no cliques or little groups. Everyone is smiling again and everyone wants to come away and play for Scotland.”

Fraser’s early goal was enough to earn Scotland victory and move them four points clear of the Czechs in their Nations League group with two games to play.

It was also the third consecutive game in which Clarke’s side have kept a clean sheet and ensures they have now not lost for over a year.

Their last defeat came against Russia in Moscow in October 2019 – a game which ended any chance of automatic qualification for the European Championship – and the manager pointed to that match as a turning point.

“It’s a slow process that started when we lost heavily in the Luzhniki,” he said. “We spoke at length about that being the low point and building from there and we’ve managed to do that.

“Tonight, it was a gritty performance. The shape, the resilience, the character was good. Everything we’re trying to put into the team showed and we have a threat going forward now.

“We wanted a big month at home to give us a chance of promotion [in the Nations League]. That will improve ranking and hopefully come the next World Cup draw we get the benefit of that.” 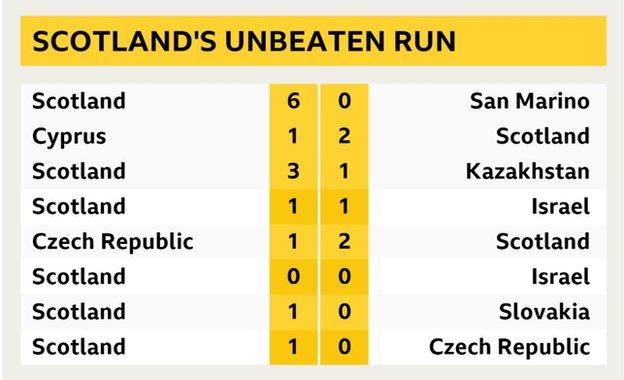