The Diamonds have slipped to defeat in their first Test under new coach Stacey Marinkovich, losing 49-44 to New Zealand in the Constellation Cup opener.

On Tuesday night, some 492 days after their last outing and two days after finishing quarantine, Australia were beaten out of the blocks in Christchurch and never recovered. The victory will raise Kiwi hopes of winning the Cup for the first time since 2012. 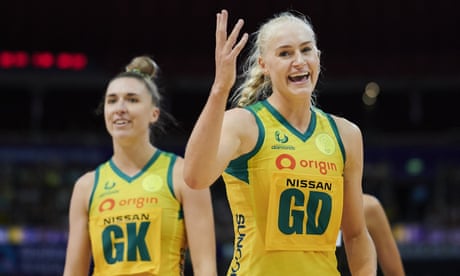 Down by four at quarter-time and seven at the half, New Zealand’s lead blew out to double figures early in the third term before Australia stormed back.

Marinkovich rang the changes and had some success: Captain Caitlin Bassett at shooter and debutant Kiera Austin in goal attack put on five straight goals. The injection of Karin Burger in defence midway through the third term turned the tables, and the Silver Ferns went to the last change ahead 40-31.

Centre Liz Watson said the Diamonds made “basic errors” and “struggled to get through the zone defence”.

Australia shaded Aotearoa in the fourth quarter, winning it 13-9, but left themselves too much to do. Bassett, the regular skipper under former coach Lisa Alexander but the first of Marinkovich’s rotated leaders in this series, scored 19 goals from 21 attempts in a strong display.

Against a steely Silver Ferns defence, Austin showed early nerves, missing four of her first 10 before finishing with 18 from 24 shots. Verity Charles also made a Diamonds debut, playing the second half at wing attack. A third debutant, Cara Koenen, took Bassett’s place for the fourth term and scored seven, shooting at 100%.

The series is being played behind closed doors in Christchurch this week, with crowds and matches in Tauranga scrapped due to a Covid-19 outbreak. Australia will need to win the final three games or tie the series 2-2 with a healthier goal difference to retain the Constellation Cup for an eighth straight time.

Silver Ferns coach Noeline Taurua, who masterminded her side’s boilover 2019 World Cup final win over Australia, served the Diamonds notice of their intent. “We’re gunning for it,” Taurua said. “Now is the time for us.”

Game two is on Wednesday before the series concludes with matches on Saturday and Sunday.

… we have a small favour to ask. You’ve read

in the last year. And you’re not alone; through these turbulent and challenging times, millions rely on the Guardian for independent journalism that stands for truth and integrity. Readers chose to support us financially more than 1.5 million times in 2020, joining existing supporters in 180 countries.

For 2021, we commit to another year of high-impact reporting that can counter misinformation and offer an authoritative, trustworthy source of news for everyone. With no shareholders or billionaire owner, we set our own agenda and provide truth-seeking journalism that’s free from commercial and political influence. When it’s never mattered more, we can investigate and challenge without fear or favour.

Unlike many others, we have maintained our choice: to keep Guardian journalism open for all readers, regardless of where they live or what they can afford to pay. We do this because we believe in information equality, where everyone deserves to read accurate news and thoughtful analysis. Greater numbers of people are staying well-informed on world events, and being inspired to take meaningful action.

In the last year alone, we offered readers a comprehensive, international perspective on critical events – from the Black Lives Matter protests, to the US presidential election, Brexit, and the ongoing pandemic. We enhanced our reputation for urgent, powerful reporting on the climate emergency, and made the decision to reject advertising from fossil fuel companies, divest from the oil and gas industries, and set a course to achieve net zero emissions by 2030.