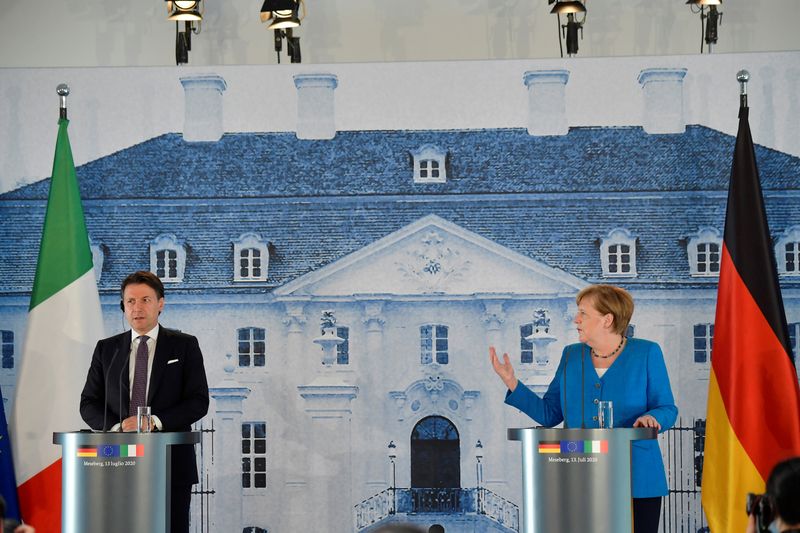 BERLIN (Reuters) – Germany and Italy agree in principle on proposals to bridge gaps among EU states on a long-term budget and a stimulus plan, Chancellor Angela Merkel said on Monday, warning there was no certainty of a deal.

During a news conference with Italian Prime Minister Giuseppe Conte at a palace just outside Berlin, Merkel said she could not guarantee that EU member states will reach an agreement on the proposals by European Council President Charles Michel at a summit on July 17-18.

“I don’t know if we will reach an agreement,” said Merkel. “It is still not sure and the path remains long.”

Michel will chair the first face-to-face talks of the 27 European Union heads since lockdowns took hold in March and feuds over how to respond to the coronavirus divided the bloc.

Hoping to overcome major differences over how to revive economic growth between the wealthy, thrifty north and the high-debt south, hit harder by COVID-19, he proposed a smaller joint EU budget for 2021-27 than previously envisaged.

Michel has presented a long-term EU budget of 1.074 trillion euros and a recovery fund of 750 billion euros for pandemic-hammered economies, with two-thirds of that to be in the form of free grants and a third issued as repayable loans.

Dutch Prime Minister Mark Rutte – the key hawkish figure in the talks – has insisted on enshrining economic reforms as conditions for accessing the funds, something the south wants to avoid.

Italian Prime Minister Giuseppe Conte warned during the news conference with Merkel that EU economic stimulus for member states should not carry too much conditionality.

Conte said Italy was happy for EU institutions to monitor its economic reforms but imposing excessively stringent conditions would be counter-productive.

“It’s not in anybody’s interests to introduce conditionality that would compromise the support of the programme or give it scarce practical impact,” Conte said.