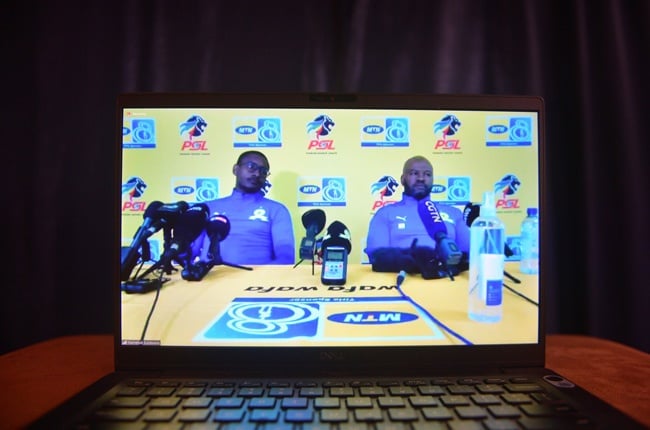 In their first press conference together as joint head coaches of Mamelodi Sundowns, Rulani Mokwena and Manqoba Mngqithi admits to laughing at all the comments made regarding their appointments.

To make it even more interesting, Steve Komphela was added to the mix as a senior coach and he will be reporting to both Mokwena and Mngqithi.

These acquisitions all followed the departure of Pitso Mosimane to Al Ahly in Egypt.

Speaking to the media on Thursday, Mokwena said that if there was a club in South Africa that could juggle more than one head coach, it would be the Brazilians.

“It’s a right club to have four dictionaries‚” Mokwena said ahead of Sundowns’ first match of the 2020/21 season.

“The players are in the right space‚ don’t worry. We joke about it‚ it’s part of the game and it’s a game of opinions.

“That’s it. You take it on the chin (criticism of the coaching structure) and move on.

“Unfortunately, when you’re in our space‚ as leaders we’re exposed to millions and millions of opinions.

“The reality is that if you don’t have a thick skin and if you listen to too many voices‚ you’ll be distracted.

“Unfortunately, when you’re in this industry it comes with the tag‚ and the tag is you need a thick skin to survive because everybody thinks they can tell Michael Schumacher how to race the car.

“But the reality is only Michael Schumacher can race the car and he has to make a very good effort to make sure that he wins because there’s pressure to win. So that’s the reality that we find ourselves in.

“We have to have the right chemistry and understanding. There are millions of people that have high expectations for us to be able to represent them.

“And like coach Pitso said‚ ‘The face is not as important as the rest of the body’.

“We have got a sense of humour also about us and I think it’s okay that we’re known as Shadrach‚ Meshach‚ and Abednego (a biblical story of three men thrown into a fiery furnace). But we’ll keep going.”

Sunday’s MTN8 quarter-final clash against Maritzburg United (kick-off is at 15:00) will serve as a window for all to see whether or not having three coaches at a club works.

In his own dissertation of the appointments, Mngqithi revealed that the public will always form their own opinions and believes it is unfortunate that majority of it will be negative.

“Nothing is newsworthy every day‚” the former Golden Arrows coach said chuckling.

“We know the space that we’re in and we’ve heard the issue of dictionaries and the three leaders in the bible.

“We laugh at these things because we’re asking ourselves which one is Abednego‚ but it’s okay.

“The truth of the matter is the only unfortunate part in our society is we’re too entrenched into thinking about positions. And I always say to people‚ a position is the lowest part of leadership.

“The most important elements in leadership are beyond the position. If you’re a father in your house‚ you can’t be busy telling your kids‚ ‘I’m your father’‚ because it’s not about being known that you’re a father.

“It’s about the responsibilities of being a father and taking care of your family.

“Why do you keep making them aware that you’re the father. Maybe it’s because you doubt and there’s something that they’re not sure of.

“The position is the lowest point of leadership in any leadership context. If the players and the supporters believe that we can lead them‚ it’s a very important step.

“It’s very important for our society to move a little bit away from the worry of positions but look more deeper into the abilities of people to carry their responsibilities.