The world got its first close-up look at a Mars landing on Friday, as NASA released a stunning picture of its newest rover being lowered onto the dusty red surface.

The photo was released less than 24 hours after the Perseverance rover successfully touched down near an ancient river delta, where it will search for signs of ancient life and set aside the most promising rock samples for return to Earth in a decade.

NASA equipped the spacecraft with a record 25 cameras and two microphones, many of which were turned on during Thursday’s descent.

The rover is shown in extraordinary detail just 6 1/2 feet (2 meters) off the ground, being lowered by cables attached to an overhead sky crane, the red dust kicked up by rocket engines. NASA’s Jet Propulsion Laboratory in Pasadena, California, promises more photos in the next few days and possibly also an audio recording of the descent.

“This is something that we’ve never seen before,” flight system engineer Aaron Stehura noted at a news conference. “It was stunning, and the team was awestruck. There’s just a feeling of victory that we were able to capture these and share it with the world.”

Chief engineer Adam Steltzner called the picture “iconic,” putting it right up there with photos of Apollo 11’s Buzz Aldrin on the moon, Saturn as seen by Voyager 1, and the Hubble Space Telescope’s “pillars of creation” shot. 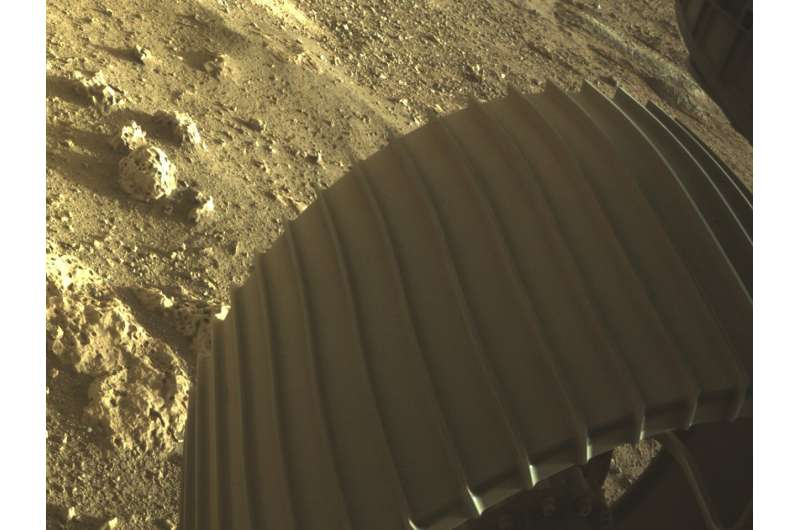 This photo provided by NASA shows one of the six wheels on the Perseverance Mars rover, which landed on Thursday, Feb. 18, 2021. (NASA/JPL-Caltech via AP)

A number of thumbnail images have been beamed down so far, too many to count, said Pauline Hwang, strategic mission manager for surface operations. “The team went wild” at seeing these first pictures, she said.

The picture is so clear and detailed that deputy project scientist Katie Stack Morgan at first thought she was looking at a photo from an animation. “Then I did a double take and said: `That’s the actual rover!’ ”

The vehicle is healthy, according to officials, after landing on a flat, safe surface in Jezero Crater with just 1 degree of tilt and relatively small rocks nearby. For now, the systems still are being checked. It will be at least a week before the rover starts driving.

The river delta—awash 3 billion to 4 billion years ago—is just over 1 mile (2 kilometers) away. Scientists consider it the most likely place to find rocks with evidence of past microscopic life.

Another photo of Perseverance’s front right wheel, near rocks full of holes, already has scientists salivating. They’re eager to learn whether these rocks are volcanic or sedimentary. 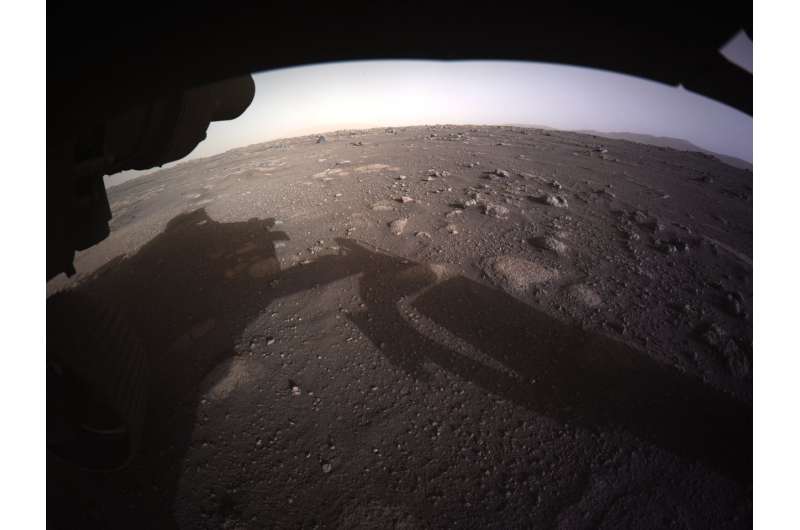 This photo provided by NASA shows the first color image sent by the Perseverance Mars rover after its landing on Thursday, Feb. 18, 2021. (NASA/JPL-Caltech via AP)

It’s the ninth time that NASA has successfully landed on Mars __ and the fifth rover.

As it did with 2012’s Curiosity rover—still roaming 2,300 miles (3,750 kilometers) away—NASA’s Mars Reconnaissance Orbiter photographed Perseverance descending beneath its massive parachute. In each case, the spacecraft and chute resembled specks.

Curiosity’s cameras caught a stop-motion movie of the last two minutes its descent, but the images were small and fuzzy. NASA loaded up the heftier Perseverance and its descent stage with more and better cameras, and made sure they were turned on for the entire seven-minute plunge through the Martian atmosphere.

China will attempt to land its own much smaller rover in late spring. It’s been orbiting Mars for 1 1/2 weeks. The United Arab Emirates also put a spacecraft into Martian orbit last week.

2021-02-21
Previous Post: Celebrities Diagnosed With Coronavirus
Next Post: Black Entrepreneur Teaching Students How to Make Money From Amazon and Ebay to Pay For College

END_OF_DOCUMENT_TOKEN_TO_BE_REPLACED

Channel migrants seeking UK asylum are smuggling themselves back to France, says charity