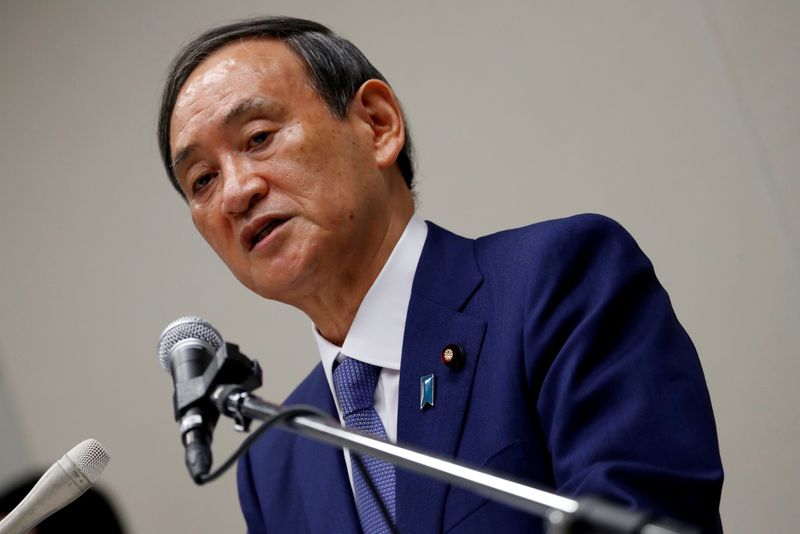 
By Leika Kihara and Yuka Obayashi

TOKYO (Reuters) – Japan’s Chief Cabinet Secretary Yoshihide Suga, a frontrunner to be the next prime minister, said he would like the central bank to continue its ultra-loose monetary policy as the economy is still struggling with the impact of the coronavirus pandemic.

In an interview that ran on Saturday in the newspaper, Suga also said he would consider compiling another economic stimulus package by the end of this year to “put the pandemic to an end and shift the economy to a new stage.”

“I want to carry over (the bold easing steps),” he was quoted as saying by the paper.

The remarks reinforce expectations that Suga will continue with many of Abe’s pro-growth economic policies as the pandemic adds to the pain of an economy already in deep recession.

He also expressed hope of creating a new government agency to promote digitalisation of government services and various industries such as healthcare, as delays on this front have slowed payouts to companies and households hit by COVID-19.

“I know there could be resistance, but we should move forward on this,” Suga said of his plan to allow clinics to permanently offer medical treatment online.

Japan currently allows online treatment only as a temporary step to accommodate patients having difficulty visiting hospitals due to COVID-19.

Suga is widely expected to win the Liberal Democratic Party’s (LDP) leadership election on Sept. 14, set after Abe’s decision to step down. The winner is virtually assured of becoming premier due to the LDP’s parliamentary majority.

Markets have been rife with speculation that Suga, upon becoming prime minister, may call a snap election in coming months to solidify his political grip.

“What people want most from the government is to deal with the pandemic and create a safe environment to live,” Suga told a television programme, when asked whether he would call an early snap election if he becomes Japan’s new leader.