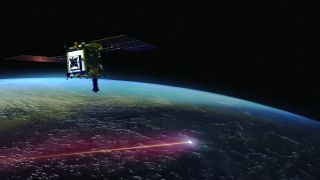 The sample-return capsule from Japan’s Hayabusa2 spacecraft returns to Earth carrying pieces of asteroid Ryugu in this artist’s illustration. The landing is set for Dec. 6, 2020.

The pristine asteroid material collected by a Japanese spacecraft last year will come down to Earth less than five months from now, if all goes according to plan.

The Japan Aerospace Exploration Agency (JAXA) “has applied for the Authorization of Return of Overseas Launched Space Object (AROLSO), and both agencies are currently in the process of confirming this. The application will be approved under the Australian Space Activities Act, which came into force in 1998,” JAXA and Australian Space Agency officials said in a joint statement yesterday.

Hayabusa2 launched in December 2014 and arrived at the rubbly Ryugu in June 2018. The spacecraft deployed multiple miniprobes onto the asteroid’s surface, taking Ryugu’s measure in a number of ways.

And the Hayabusa2 mothership made its own way to Ryugu’s surface twice in 2019. It grabbed some surface material in February of that year, and in July, the probe scooped up subsurface stuff exposed by a copper “bullet” that Hayabusa2 had slammed into the asteroid in April.

Hayabusa2 left Ryugu in November 2019, beginning the trek back toward Earth. The mission plan has always been to bring a small capsule containing the Ryugu samples down to Earth in December 2020 at the Woomera Range Complex, a South Australian facility run by the Royal Australian Air Force. The new announcement solidifies that aim and provides a targeted landing date to boot.

Planetary scientists are eager to get the Ryugu material into their labs here on Earth, where it can be studied in great detail with a variety of powerful instruments. The Ryugu samples could shed considerable light on asteroid formation and evolution, as well as the role that carbon-rich space rocks may have played in helping life get going on Earth, researchers have said.

NASA has its own asteroid-sampling mission operating now. The OSIRIS-REx spacecraft has been studying the carbon-rich asteroid Bennu up close since December 2018 and is scheduled to snag samples this coming October. If all goes according to plan, this material will come back to Earth in September 2023, with a touchdown in the Utah desert.

JAXA has used the Woomera range for a far-flung delivery before: The original Hayabusa mission’s sample-return capsule, which contained grains from the stony asteroid Itokawa, came down there in 2010.

2020-07-15
Previous Post: ‘A Day in Space’: How to watch the National Space Society’s virtual event Thursday
Next Post: New climate study shows that we need to be patient when it comes to emissions mitigation