YouTuber James Charles has publicly apologized to Alicia Keys after indirectly tweeting about her.

On Wednesday, Charles voiced his opinion that “people who do not wear makeup should not be coming out with makeup brands” in a now-deleted tweet. He was seemingly referencing Keys, who will be launching a “lifestyle beauty brand” with e.l.f. Cosmetics in 2021, according to a press release from the brand.

In a note shared on Thursday, however, the YouTuber said he deleted the tweet because he feels it’s “childish” to indirectly tweet someone, and that he is “not the gatekeeper of makeup.”

“Yesterday I posted a subtweet about how I thought some celebrities shouldn’t launch makeup lines,” Charles wrote. “It was about Alicia Keys. A few years ago, she announced that she no longer would wear makeup, so I was bothered because many celebrities come into the beauty space as a cash grab without any actual passion and then leave.”

“I deleted the tweet after a few mins because it’s childish to indirect tweet someone & I am not the gatekeeper of makeup,” he continued. “Anyone should be able to secure their bag and it’s not up to me which brands people should or shouldn’t support. I’m now glad that I DID delete it because after reading further, I learned that the beauty line is SKINCARE.”

Charles added that he felt he made a mistake, and that he “should’ve read more before tweeting.”

“Regardless of my intention with my tweet, it ended up being a microaggression against someone I respect, so to Alicia Keys I owe a direct apology — I’m sorry,” he said. “It wasn’t my place to gatekeep this industry. I can’t wait to support and try out the products and I know the brand will be worth a billion in a few years.”

YouTuber Manny MUA also took to Twitter after the announcement, writing in a now-deleted tweet: “does anyone else get slightly irritated when celebs come out with entire makeup lines? especially when those celebs don’t even wear makeup… i’m like girl.” 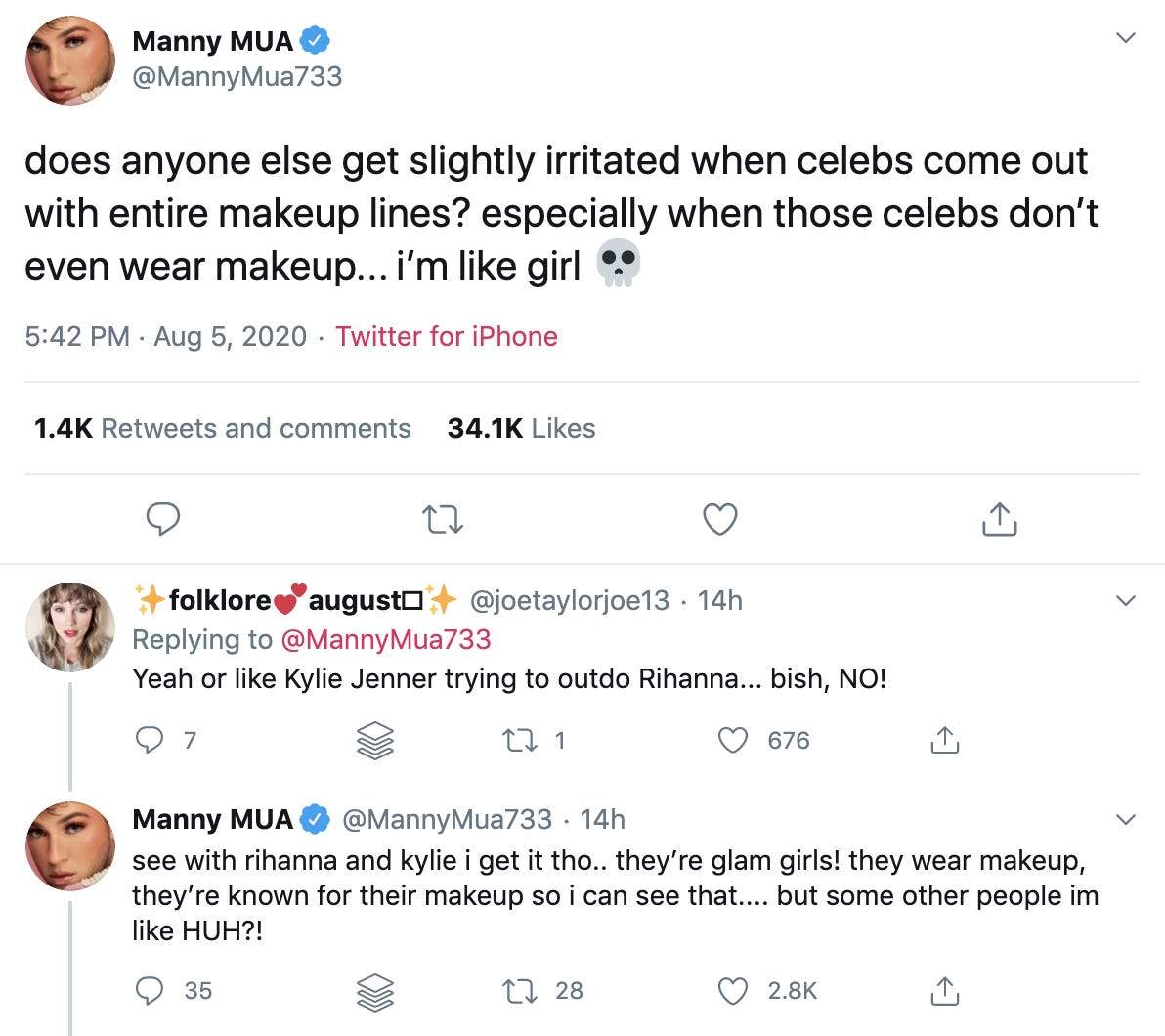 Charles, Manny MUA, and other critics of Keys’ upcoming brand argued that it doesn’t make sense for an advocate of the no-makeup movement to launch cosmetics. However, it was pointed out by others online that Keys and e.l.f. Cosmetics have yet to confirm if the brand will offer makeup.

E.l.f. Cosmetics previously declined to comment when asked if Keys’ collaboration will feature makeup, skin-care items, or both.

Manny MUA has since issued an apology to Keys for having “jumped the gun” with his tweets.

“So yesterday I tweeted that I get slightly irritated when large celebs create cosmetics lines when they don’t wear tons of makeup because I saw the news that Alicia Keys is releasing a beauty line,” Manny MUA wrote. “I only tweeted because I know that she stopped wearing makeup years ago, but I should have researched more to discover that she is working with e.l.f. cosmetics to develop SKINCARE.”

He added that he is “defensive” of the beauty community, but that he “shouldn’t have jumped the gun” as he’s “not the be all end all voice of makeup.”

“Anyone can create what they want to create!” he said. “That’s the beauty of our community! I apologize to those who I upset with my tweet and to Alicia Keys for being so quick to make a judgement — there is room and space for EVERYONE in this community.”

Charles, however, has responded to one person who argued that the YouTuber should not have apologized because he’s “not on her radar.”

“she follows me on Instagram but alright lol,” Charles said.

Representatives for Alicia Keys did not immediately respond to Insider’s requests for comment.