By: climaxnews
In: Technology
Tagged: Galaxy, Samsung
With: 0 Comments

Android Police is reporting that it has obtained a list of specs and features that will be featured in the upcoming Samsung Galaxy S21 series.

Here’s a tablet from the outlet containing all of the specs: 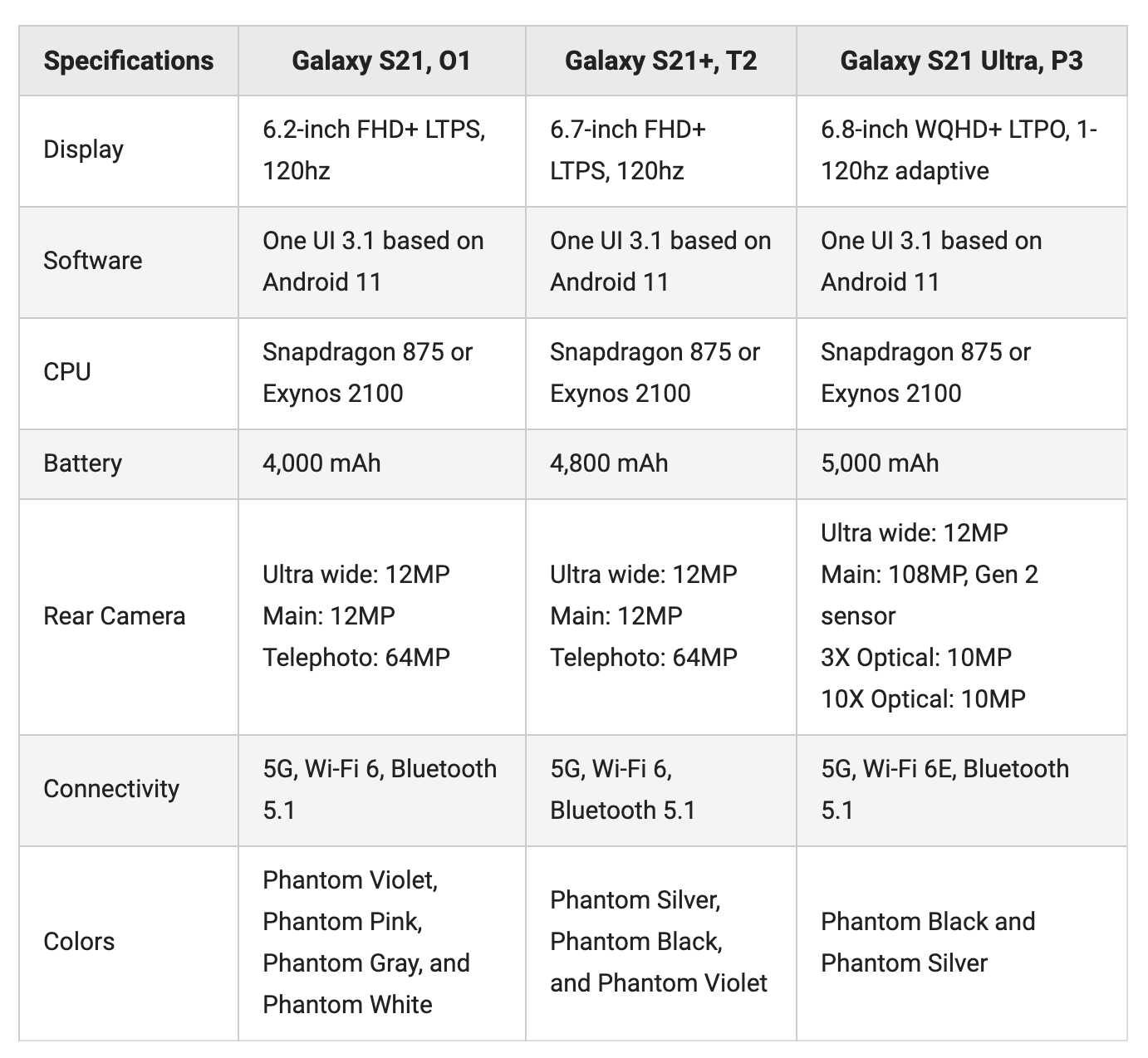 For context, Android Police says the ‘O1,’ ‘T2’ and ‘P3’ refer to the codenames for the Galaxy S21, Galaxy S21+, and Galaxy S21 Ultra, respectively. According to the outlet’s source, the base S21 will feature a plastic rear cover versus the S21 Ultra’s glass cover. There was no word, however, on what material the S21+ will use.

Android Police also says it’s seen official renders of the upcoming handsets, although it’s not releasing them so as to protect its sources’ identities. However, the site did say that the S21 CAD renders leaked last month are indeed accurate. That would mean that the phones will have a camera bump extruding from the upper left corner, which Android Police says will be part of the frame itself. Both the frame and the bump will reportedly come in different colours depending on the device; the Phantom Black colourway has a black frame and camera bump compared to the copper body for the Phantom Violet and Phantom Pink colorways.

In terms of specs, Android Police is noting that the phones will — as usual — sport two processors that differ depending on the region. One is said to be the Snapdragon 875, with the other being the Exynos 2100. Both are expected to be 5G-compatible. According to Android Police‘s source, the Exynos 2100 may be “on par or better” than the Snapdragon 875. Further, the Exynos chip is reportedly more power-efficient to offer improved battery life. On the subject of battery, all S21 models are expected to support 25W fast charging or higher.

Display-wise, the S1 and S21+ will both feature FHD+ 120hz screens, notes Android Police, although they won’t have the Note 20 Ultra’s advanced adaptive refresh LTPO panels feature. What’s more, the outlet says it was told that the 21 Ultra is will have “one of the best displays on any smartphone,” and a peak brightness of 1,600 nits. Finally, the S21 Ultra will reportedly support the S Pen, although it will not be included in the box.

Although each phone has different camera systems, Android Police also reports that all three phones will be capable of 4K/60fps video recording, Super Steady stabilization, and an option for 8K/30fps. It’s worth noting that this is an improvement over the  8K/24fps option found in the S20 and Note 20 series.

Finally, Android Police notes that Samsung might also lower the price of the upcoming phones both to remain competitive and in response to the global pandemic. However, potential pricing for various markets — including Canada — remains unknown.

In any case, we’ll likely know more about the three S21 phones in exactly two months, as Samsung is rumoured to officially unveil them on January 14th, 2021.