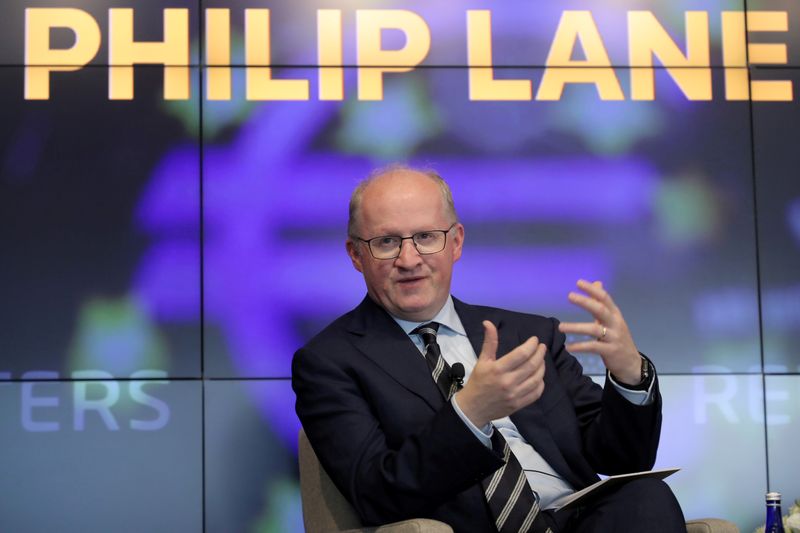 
FRANKFURT (Reuters) – European Central Bank policymakers warned on Friday against complacency over low inflation and highlighted risks from a strong euro, nuancing the bank’s benign message from a day earlier, which some argued denied difficult realities.

Speaking a day after the ECB took an unexpectedly relaxed stance on growth and inflation at its regular policy meeting, chief economist Philip Lane and French central bank chief Francois Villeroy de Galhau both highlighted risks from a strong currency, noting that it clearly mattered for policy because it curbed price pressures.

ECB board member Isabel Schnabel also emphasised the ECB would “be careful to not choke the incipient recovery” by tightening its ultra-easy policy of massive bond purchases and negative rates on bank deposits too early.

ECB President Christine Lagarde had on Thursday said the ECB would merely “carefully” monitor the exchange rate, the weakest form of verbal intervention, which actually sent the euro up as investors started to doubt the ECB’s resolve to add to stimulus.

But Friday’s comment, including Lane’s emphasis that more data in the coming months would help calibrate policy, is likely to reinforce market expectations that the ECB will eventually expand its 1.35 trillion euro ($1.6 trillion) Pandemic Emergency Purchase Programme, possibly as soon as December.

“Inflation remains far below the aim and there has been only partial progress in combating the negative impact of the pandemic on projected inflation dynamics,” Lane said in a blog post. “It should be abundantly clear that there is no room for complacency.”

Villeroy also took aim at the euro, which has firmed 8% against the dollar since the start of the coronavirus crisis in spring, and earlier this month hit $1.20, a key psychological level that has in the past triggered ECB concern.

“We don’t target exchange rates,” Villeroy said in a speech. “But obviously the exchange rate does matter for inflation and monetary policy.”

Both policymakers also repeated the ECB’s standard message that the bank was ready to do more, if needed.

The euro () was trading around $1.1840 early on Friday, not far from its levels before the ECB meeting. It is generally expected to firm over the coming months after the U.S. Federal Reserve shifted strategy, suggesting it would raise rates more slowly than in the past and so encouraging investors to seek returns elsewhere.

But sources close to Thursday’s discussion said the ECB had opted for the benign message because 1.20 is not far from what they consider the equilibrium exchange rate and is no longer the key threshold it once was.

Still, Lane echoed Villeroy’s message on the euro, arguing that its recent appreciation dampens inflation, which is expected to remain persistently below the ECB’s target of almost 2%.

Lane added that inflation in the 19-country euro zone would remain negative for the rest of this year, even if August’s especially weak underlying inflation readings were skewed by exceptional factors.