MARVEL superfans have been treated to a first look at their new Disney+ show 616.

The insightful documentary series delves into Black Panther rise to popularity and how the reaction to Captain  Marvel  influenced the creation of Ms Marvel – a Muslim crime-fighting superhero.

A different aspect of the Marvel Universe is set to explored in each of the episodes, including its cultural impacts, and will air on the streaming service later this year.

Speaking about the effect of the 2019 film starring Brie Larson, Marvel Entertainment VP Sana Amant said: “We saw this really great spike in excitement, love and passion with Captain Marvel and it really inspired us to do more because we knew there was a fan community out there…

“Captain Marvel was sort of that signpost for change.”

Sana went on to reveal that the Ms Marvel character, aka Kamala Khan, was created from her own experiences as a young Muslim woman.

The comic was written by G Willow Wilson and Adrian Alphona, but G Willow admitted her doubts about the idea on screen.

She said: “I was pretty convinced they were joking!

“How often does that happen!”

The actor and director discusses how some classic Marvel characters managed to hit the big time and others struggled.

Black Panther’s Reginald Hudlin who started writing the comic books in 2005 through to 2018, told him: “I knew what the opportunity for Black Panther was if I did it right.

“A completely uncompromised, politically provocative book – and that was the key to success.”

Paul also touches on the comic book flops like Doctor Druid, a second rate Doctor Strange, The Whizzer who was injected with mongoose blood, and Typeface – a villain who’s fired from a sign-making company.

Disney+ ‘s next adventure in the  MCU  is one of  Marvel ‘s most ambitious series yet — even if no Infinity Stones were required for its creation.

Marvel is opening up its vast archive to famous super-fans for anthology documentary series 616, in which a new filmmaker will explore a different facet of the Marvel Universe in each episode.

Jacobs’s ‘Higher, Further, Faster’ fittingly takes its name from  Captain Marvel ‘s iconic catchphrase, because the episode features interviews with the pioneering women behind the scenes at Marvel. 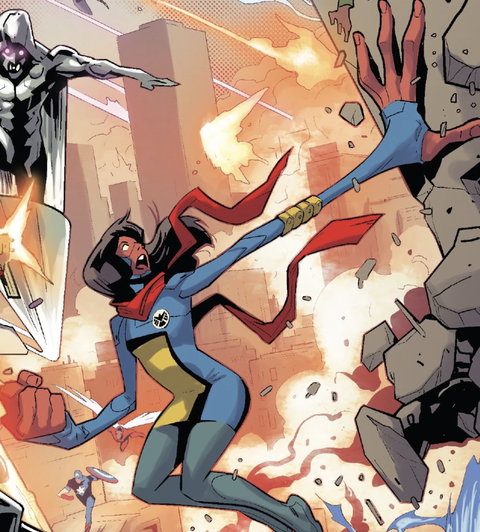 Ms Marvel/Kamala Khan was inspired by the success of Captain MarvelCredit: Marvel Comics

Marvel Entertainment VP Sana Amant explains how the passionate response to Brie Larson’s movie inspired the company to “do more” with the character and other powerful female heroes.

Sana also reveals how Ms Marvel (aka Kamala Khan) was originally shaped from her own experience as a young Muslim woman by writer G Willow Wilson and Adrian Alphona.

Paul Scheer’s ‘Lost and Found’ is a look back at how certain classic characters from Marvel lore broke through to the mainstream, including  Black Panther .

But not every Marvel superhero catches on, so Scheer also spotlights flops like Doctor Druid, The Whizzer and Typeface. (Yes, there really was a villain created from being fired from a sign-making company).

Marvel’s 616 is set to premiere this autumn on  Disney+ . Unfortunately, another Marvel show set for the streaming service has hit a snag, as it was revealed this week that  Falcon and the Winter Soldier  is  facing a significant delay .

2020-07-23
Previous Post: What time is Taylor Swift’s album Folklore released in the UK?
Next Post: The racism faced by teenagers in the UK: new research