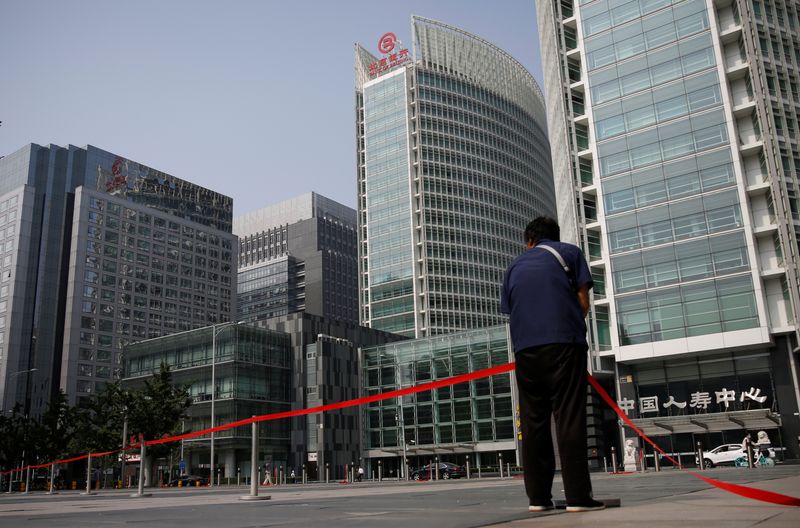 © Reuters. Worker wearing a face mask following the outbreak of the coronavirus disease (COVID-19) sets up a line at a square at the Financial Street area in Beijing

By Gabriel Crossley and Kevin Yao

BEIJING (Reuters) – China’s economy returned to growth in the second-quarter after a deep slump at the start of the year, but domestic consumption and investment remained weak as the shock from the coronavirus crisis underscored the need for more policy support to bolster the recovery.

The gross domestic product (GDP) data, as well as key June indicators, will be closely scrutinized around the world, especially as many countries continue to grapple with the COVID-19 pandemic even as China has largely managed to contain the outbreak and has begun to restart its economic engines.

GDP rose 3.2% in the second-quarter from a year earlier, the National Bureau of Statistics said on Thursday, faster than the 2.5% forecast by analysts in a Reuters poll, as lockdown measures ended and policymakers ramped up stimulus to combat the pandemic-led downturn.

The bounce was still the weakest expansion on record, and followed a steep 6.8% slump in the first quarter, the first such contraction since at least 1992 when quarterly gross domestic product (GDP) records began.

“While in general it’s fair to say that the numbers beat expectations, what the numbers also reveal is that we’re seeing that the China consumer remains behind in terms of the recovery story,” said Rodrigo Catril, a foreign exchange strategist at NAB in Sydney.

“It’s very much a story of government stimulus-led recovery, which is very much focused on the industrial side. The consumer remains very cautious. That cautiousness is something the market is looking at in terms of countries where the consumer plays a bigger role, so that’s obviously relevant for the U.S. as well.”

Indeed, the consumption downturn has been telling.

Wanda Film, China’s largest cinema chain operator which has more than 600 cinemas, said on Tuesday it expects to report a net loss of 1.5-1.6 billion yuan ($214-228 million) after the coronavirus kept its cinemas shut for almost the entire period. The company reported a net profit of 524 million yuan in the same period last year.

Chinese airlines, along with their global counterparts, have also been hurt by the travel disruptions caused by the pandemic. The Civil Aviation Administration of China (CAAC) has said that China’s aviation industry lost 32.45 billion yuan in the second quarter.

In the first half of the year, the economy contracted 1.6% from a year earlier, the data showed, underscoring the sweeping impact of the health crisis.

On a quarter-on-quarter basis, GDP jumped 11.5% in April-June, the NBS said, compared with expectations for a 9.6% rise and a 10% decline in the previous quarter.

China’s economy, the first in the world to be jolted by the coronavirus pandemic, has been recovering slowly in the past two months, though the bounce from the virus-induced downturn has been uneven.

Authorities are widely expected to maintain policy support in the second half to bolster the revival, despite concerns over rising debt risks.

Ruan Jianhong, head of the central bank’s statistics department, said last week that China’s macro leverage ratio jumped 14.5 percentage points in the first quarter and climbed further in the second quarter. No details were given on the actual debt level.

The Institute of International Finance estimates China’s total debt rose to 317% of gross domestic product in the first quarter of 2020, up from 300% in late 2019 and the largest quarterly increase on record.

The government has rolled out a raft of measures, including more fiscal spending, tax relief and cuts in lending rates and banks’ reserve requirements to revive the coronavirus-ravaged economy and support employment.

Rising coronavirus infections in some countries, including the United States, have overshadowed improved demand for Chinese exports while heavy domestic job losses and lingering health concerns have kept consumers cautious.

China’s industrial output rose 4.8% in June from a year earlier, the data showed, quickening from a 4.4% rise in May. That marked the third straight month of growth for the vast sector, offering some relief to the economy as it tries to regain its footing.

But consumption and investment remain weak. Retail sales were down 1.8% on-year – the fifth straight month of decline and much worse than a predicted 0.3% growth, after a 2.8% drop in May.

Fixed asset investment fell 3.1% in the first half of the year from the same period in 2019, compared with a forecast 3.3% fall and a 6.3% decline in the first five months of the year.

China’s Xi Warns Against Confrontation in Veiled Message to Biden