Video shows an officer exiting his vehicle and chasing Toledo, who is running down an alley. When the officer catches up to the teen, he orders him to raise his hands and yells, “Drop it, drop it.” The officer fires a single shot to Toledo’s chest as the teen raises his hands.

The teen drops to the ground and the officer rushes to administer aid and calls for backup. Police have said a semi-automatic pistol was recovered a few feet away. Lightfoot on Thursday said there was “no evidence” the teen fired the weapon before he was shot.

The March 29 incident began around 2:30 a.m. when gunshots were picked up by a police audio scanner. Less than a minute later, police encountered Toledo and 21-year-old Ruben Roman, who was tackled by police and taken into custody. 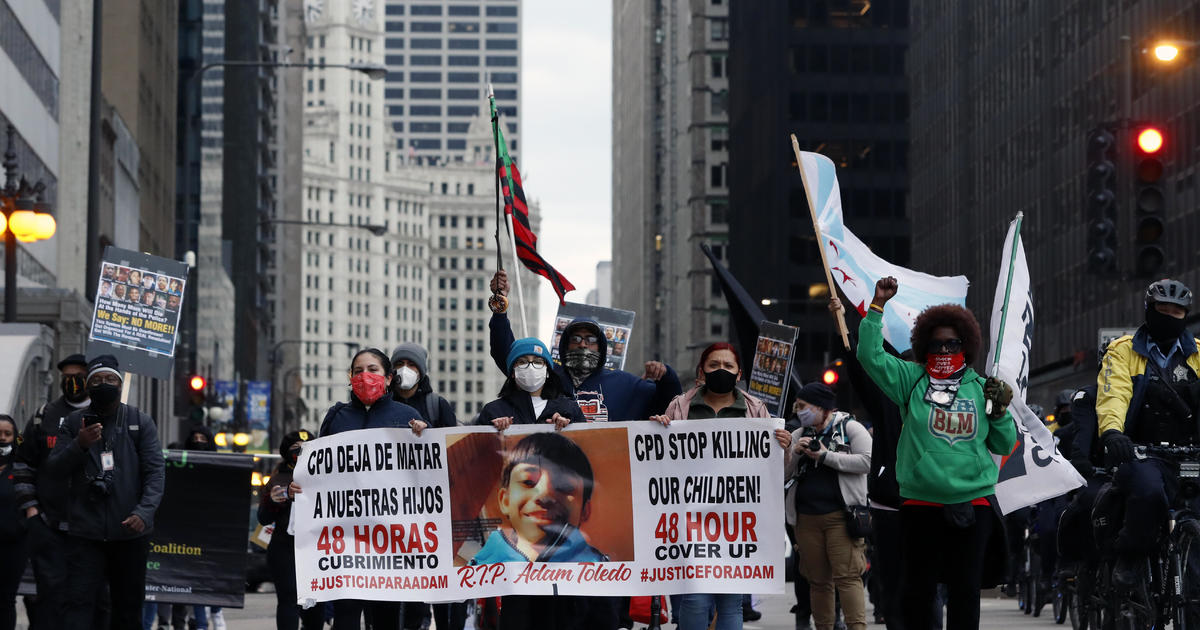 An attorney for the officer accused of shooting the teen claimed Toledo was armed and that the officer was “faced with a life-threatening and deadly force situation” and “was left with no other option.”

The attorney representing the teen’s family said Toledo was not holding the weapon when the officer opened fire. “Those videos speak for themselves,” attorney Adeena Weiss Ortiz said Thursday. “Adam, for the last second of his life, did not have a gun.”

Protesters marched in the streets of downtown Chicago overnight. The scenes were tense with demonstrators staring down police.

Ja’Mal Green, a local activist, said protesters were calling for an overhaul of the city’s police department and the resignation of Lightfoot.

Teachers union remembers Toledo: “He was one of ours”

The Chicago Teachers Union issued a statement Thursday in memory of Toledo, describing him as “one of ours.”

“Adam Toledo was loved. He was one of ours, and we are keeping his memory and his Gary Elementary School family in our hearts, along with his mother, family and the people of Little Village,” the union said. “We wish them healing and comfort right now. Love your children. Love your communities. Love yourselves.”

An attorney for the officer accused of shooting Toledo released a statement Thursday defending the officer’s actions. The statement claims Toledo was armed at the time of the shooting.

Toledo’s family has denied he was armed and there has been no conclusive report.

Adeena Weiss Ortiz, the attorney representing Toledo’s family, said the teen did not have a gun in his hand when the police officer opened fire. “Those videos speak for themselves,” she said at a news conference Thursday. “Adam, for the last second of his life, did not have a gun.”

One video shows an officer pursuing Toledo down an alley. When he catches up to Toledo, he orders him to raise his hands and yelled, “Drop it.” The teen turns around with his hands in the air before the officer fires a shot to his chest.

When asked if Toledo had something in his hand before he turned around, Ortiz said it was irrelevant because the teen attempted to comply with the officer’s demands.

“If he had a gun, he tossed it. The officer says,’ Show me your hands.’ He complied, he turned around. There’s a still photo going around on the internet and he is shot in the middle of his chest,” Ortiz said.

Chicago Mayor Lori Lightfoot on Thursday called on the city’s police department to reform its foot pursuit policy before officials release video from the fatal shooting of 13-year-old Adam Toledo.

“Foot pursuits put everyone involved at risk: the officers, the person being pursued, and bystanders,” Lightfoot said in a news conference Thursday. “We have to do better and I’ve charged the superintendent with bringing me a policy that recognizes how dangerous this is. We can’t afford to lose more lives.”

Lightfoot also urged residents to “reserve judgment” of the incident until the investigation into the shooting has been completed. Lightfoot described the footage as “excruciating” and “something you do not want children to see.”

“These videos and these moments are never easy to bear witness to,” Lightfoot said. “Adam’s death is a forceful reminder that we cannot delay these efforts any longer.”

Race report critics ‘insulting’ and taking it out of context, author says

How defunding the police backfired in Minneapolis, the city which sparked George Floyd protests across the world

‘What would Jesus do?’: Easter-inspired diner owner offers job to burglar who broke in

Northern Ireland: Why has violence broken out – and why now?
2021-04-16
Previous Post: Police ID gunman in FedEx shooting as young male in 20s
Next Post: Marc Jacobs slipped into a basic black outfit, isn’t it surprising?