By: climaxnews
In: Technology
Tagged: Budweiser, Limited
With: 0 Comments

American Budweiser beer maker Anheuser-Busch has designed a promotional PC as a marketing prank to try and grab some next-gen console headlines away from the likes of Microsoft and Sony. The PC is designed to look like a six pack of beer and isn’t just a slap dash job, some thought has been put into this design. 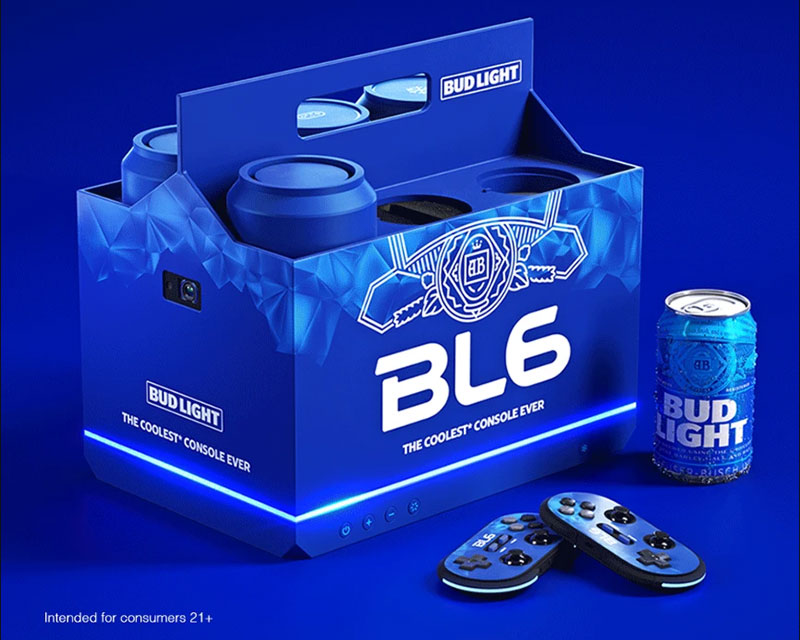 The so called Bud Light BL6 is powered by an Intel i7-1065G7 CPU and 16GB of RAM, running Windows 10 but sadly, for a next gen console competitor, doesn’t sport anything more than integrated graphics. Nevertheless it has a few surprising bonuses you wouldn’t normally find in a gaming PC; first of all there is a built-in projector, which is actually an Asus DLP system with 720p resolution and 500 lumens, secondly it can run for two hours using the built in battery, thirdly Bud Light says that two of the ‘cans’ house thermoelectric coolers and you can keep two real beer cans chilled in these receptacles.

A number of games are pre-installed on this Windows 10 luggable. There are a couple of fighting games (Tekken 7 and Soul Calibur IV) as well as a sports game and a couple of BL6 exclusive titles. It even comes with a pair of custom wireless controllers which are BL6 branded 8Bitdo N30 Pro+ gamepads.

You won’t be able to buy one of these BL6 ‘consoles’.  To get a hold of a BL6 you will have to take part in a charity auction. I see the first auction has already garnered 44 bids and is at US$4,000 at the time of writing. Proceedings go to the National Restaurant Association Educational Foundation supporting their ‘Change is on the Menu’ program.