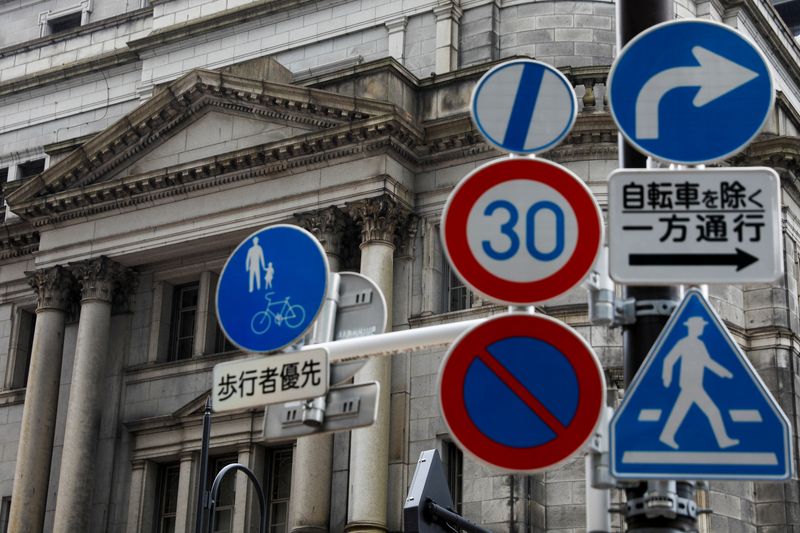 © Reuters. FILE PHOTO: Traffic signs are seen in front of the headquarters of the Bank of Japan

TOKYO (Reuters) – The Bank of Japan is likely to pause in its crisis-response moves on Wednesday as the economy emerges from the damage caused by COVID-19, but it is also expected to reassure markets it will boost stimulus again if a second wave of infections hits growth.

With markets calm and capital expenditure holding up, the central bank is seen sticking to its view Japan is headed for a moderate recovery later this year. But the outlook is clouded by a renewed rise in infections and soft exports.

“The next test for policymakers will come around autumn,” said a source familiar with the BOJ’s thinking, with the next central bank policy review due in September.

“Banks are lending aggressively now. But that may change if the pandemic persists and deepens the economy’s stagnation,” the source said, a view echoed by another source.

At its two-day rate review ending on Wednesday, the BOJ is expected to maintain its -0.1% short-term interest rate target and a pledge to cap 10-year government bond yields around zero.

It is also seen making no major tweaks to its asset-buying and lending programmes for easing corporate funding strains.

While the board may cut its growth forecasts, the BOJ is seen maintaining its cautiously optimistic view on the economy in a sign policy will be in a holding pattern.

Under yield curve control, the BOJ sets interest rates as its main policy target. But the pandemic has forced it to build crisis-fighting tools focusing on credit easing, casting doubt on how much emphasis it will keep placing on its rate targets.

While the BOJ has said rate cuts would be among options if it needed to stimulate the economy, analysts warn that doing so could hurt commercial banks’ profit and their ability to lend.

Some in the board have called for a reassessment of the BOJ’s policy framework as inflation drifts further below its 2% target, minutes of past meetings showed.

BOJ Governor Haruhiko Kuroda may offer some clues at his post-meeting briefing on the bank’s thinking on how to respond to the risk of a second wave of infection, analysts say.