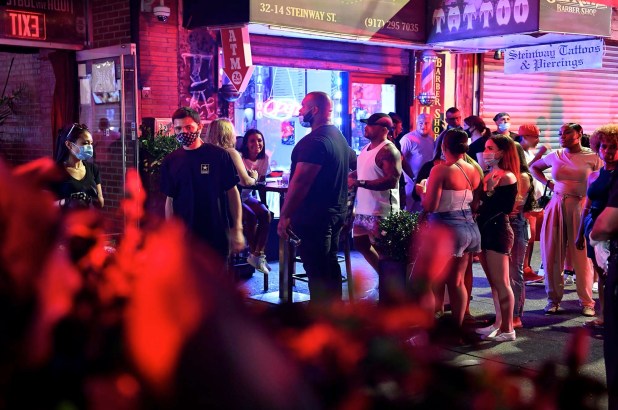 A promised NYPD ‘crackdown’ on the crowds of drinking revelers who’ve been jamming the sidewalk cafes of Astoria yielded mixed results Saturday night — when the party mostly lingered on.

Dozens of NYPD officers plus some 30 deputies from the city’s Sheriff’s Office spent hours ticketing double-parked cars and asking people to disperse along popular Steinway Street after darkness fell.

They were mostly ignored by the officers.

“Some nights I see such craziness,” he added.

“It’s like they call each other: ‘Come, we have fun times in Astoria. Whatever you like.’ And nobody stops them.”

Then, shortly after 10 p.m. Saturday, sheriff’s deputies struck at least one mobbed restaurant, “BRIK Astoria,” at Steinway and Broadway.

The officers served the restaurant with a commissioner’s order for noncompliance of social-distancing rules, barring them from serving outdoors for a week.

“We’re getting blamed for people hanging out like it’s Florida.”

The police presence on Saturday night hardly harshed the enjoyment of revelers like Michael Lantigua, of The Bronx, who came to celebrate his 26th birthday with friends.

“It was crazy, bro,” he said, clutching a bottle of Hennessy in one hand and a plastic cup of orange juice and ice in another.