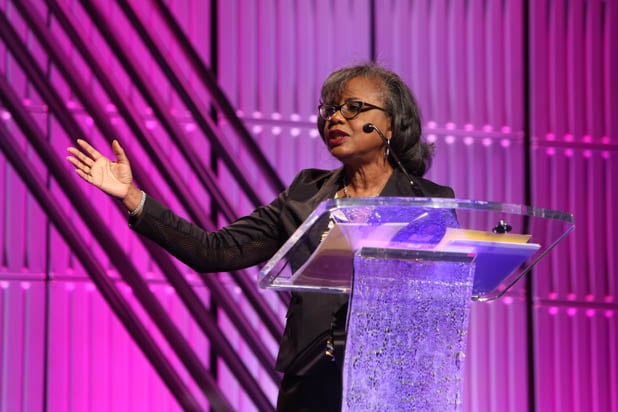 Lawyer, professor and equality champion Anita Hill will be the keynote speaker for WrapWomen’s 2020 Power Women Summit, the largest gathering of women in media and entertainment. With the theme “Inclusion 360,” the event will take place virtually December 8-10.

Hill is the chair of the Hollywood Commission on Eliminating Sexual Harassment and Advancing Equality.In this role, she establishes best practices and policies framework for addressing workplace abuse and discrimination by creating more equitable work environments throughout the industry.

Over the past month, the Hollywood Commission has released a series of reports from its landmark Hollywood Survey of more than 9,6000 entertainment industry workers. Its initial findings on accountability found that 65% of Hollywood workers did not believe that a powerful individual, such as a producer or director, would be held accountable for harassing someone with less power. In an immediate response to these results, the Commission announced it will launch a reporting platform and a bystander intervention training pilot program designed to provide resources for victims and accountability for offenders.

Hill, who served as the Power Women Summit keynote speaker in 2018, will return to the stage to discuss her progress, research and new programs.

In 1991, Hill made history when she accused U.S. Supreme Court nominee Clarence Thomas, her supervisor at the United States Department of Education and the Equal Employment Opportunity Commission, of sexual harassment. As a Black woman testifying in front of an all-white, all-male Senate Judiciary Committee, with Thomas denying his plausibility, the odds were not in Hill’s favor as Thomas was confirmed.

Despite this loss, Hill’s testimony forever changed the way we talk about sexual harassment in the workplace. One month after her testimony, Congress passed a law extending the rights of sexual-harassment victims. The year after, the Equal Employment Opportunity Commission received a 50% increase in sexual-harassment complaints from the prior year. Hill continued to focus her career on equality, becoming a professor of law, public policy and women’s studies at Brandeis University.

The Power Women Summit, presented by the WrapWomen Foundation, is the largest annual gathering of the most influential women in entertainment, media and technology. The Summit aims to inspire and empower women across the landscape of their professional careers and personal lives. This year’s all-virtual PWS provides three days of education, mentorship, workshops and networking around the globe – to promote “Inclusion 360,” this year’s theme.

To register for a pass: wrapwomen.com/power-women-summit

For more information on WrapWomen and sponsorship, please contact sales@thewrap.com