13 signings Man Utd missed out on & who they signed instead 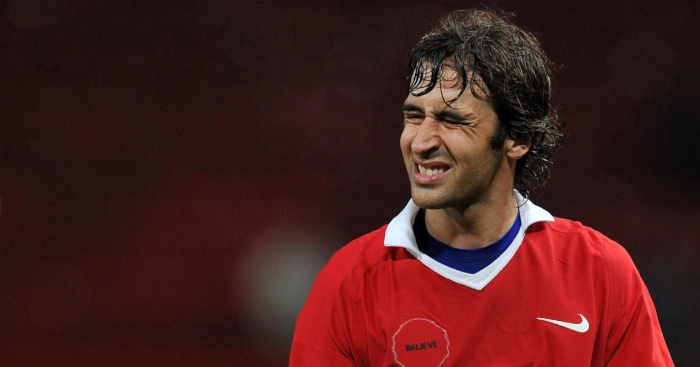 Manchester United‘s transfer business may have helped propel the club to a record number of Premier League titles, but there has still been a number of players that got away.

The club have got plenty right, not least with bargains such as Eric Cantona, Ole Gunnar Solskjaer and Nemanja Vidic, but they haven’t manage to sign everyone they wanted, even in the Sir Alex Ferguson era.

Here are 13 players who never made it to Old Trafford, despite the best efforts of the various managers in charge.

Alex Ferguson’s pursuit of Alan Shearer was no secret, and after missing out on the England striker to Blackburn Rovers he continued to keep tabs on him going into the summer of 1996.

United had won the double, but Shearer could not resist the allure of signing for boyhood club Newcastle United in a record deal.

They saved their money and instead signed Solskjaer for just 10% of the £15million Newcastle splashed out on Shearer, and had enough left over to bring in Teddy Sheringham the following summer. That turned out okay.

Batistuta’s links to United suggested Ferguson was still keen on a certain type of striker a few years later, and the Argentine was seemingly keen on a move… until he wasn’t.

He suggested in January 2000 that he’d be interested in an Old Trafford move if he ever left Fiorentina. But when he did leave the Stadio Artemio Franchi, it was to join Roma that summer.

Manchester United planned to instead move for Ruud van Nistelrooy that summer, but an injury to the Dutchman meant they ended up getting… no one.

The prospect of Ronaldinho in Manchester is one of the great what ifs, leaving us licking our lips at the thought of the move coming off.

United had been keeping tabs on the PSG man for a while after he eliminated England from the 2002 World Cup, but the Brazilian couldn’t turn down the chance to join Barcelona in the summer of 2003.

Not to worry, though. United got their hands on another of Brazil’s World Cup stars in Kleberson, bringing about only their second ever Premier League finish outside the top two.

Mind you, they also signed a young Cristiano Ronaldo that summer, which didn’t work out too badly.

United were interested in Essien on a couple of occasions, first considering signing him as a 17-year-old back in 2000 and then moving for the more complete player when it emerged that Lyon would be willing to sell.

The Ghanaian chose Chelsea, though, and can’t be too upset with how things turned out for him in London, winning all three domestic trophies and the Champions League in eight years at Stamford Bridge.

With Essien unavailable, United swooped to sign Park Ji-sung: a less decisive player, perhaps, but one who made one hell of an impact in Manchester.

Toldo was one of the goalkeepers reportedly targeted by United in 1999 after Peter Schmeichel left for Sporting Lisbon, and the Italian would later reveal that there was indeed truth to the links.

The Italian stayed at Fiorentina, though, only leaving the club when Inter came calling in 2001.

United signed not one but two goalkeepers as Schmeichel’s successor: Toldo’s compatriot Massimo Taibi arrived in the summer of 1999, only for Ferguson to decide less than a year later that he needed another stopper, moving for Fabien Barthez.

The race to sign Gareth Bale from Southampton was a fierce one, with United one of many English clubs keen on the teenage sensation.

He would eventually join Tottenham, of course, and endured a long winless run at the start of his Spurs career before eventually coming into his own and outgrowing the London club.

Having missed out on the Welshman, Ferguson completed the £30million double-swoop for Nani and Anderson. Neither perhaps made the impact that Bale, eventually, did for Spurs, but both certainly had their moments.

United apparently tried to sign Bale for a second time in 2013 but lost out to Real Madrid.

READ: Nani, Manchester United, and the unfair portrayal of a ‘frustrating’ talent

United agreed a fee with Cardiff for Ramsey, even publishing the news on their website in what strikes us as the move of a club extremely confident of getting their man, but the then-teenager chose Arsenal instead, later saying he felt more wanted there.

A few months on, United made sure they would not be gazumped in their pursuit of another young target, wrapping up the signing of Zoran Tosic from Partizan. That one didn’t go so well.

Spanish legend Raul is among the players who Ferguson reportedly changed his mind about, pulling out of a deal and allowing the Real Madrid forward to join Schalke.

Raul himself later confirmed the interest, but United already had Michael Owen so did they really need him? [Narrator: they did need him.]

Instead of wasting money on a 33-year-old with no sell-on value, United signed Bebe… who they would go on to sell at a loss.

READ: Remembering when Sir Alex Ferguson broke his own rules to sign Bebé

One of the great never-ending transfer sagas, in 2011, Sneijder admitted he had held “unofficial talks” with United over a move from Inter, but a source at Old Trafford told The Guardian the following day that the midfielder would not be joining.

Three years and a host of further links later, Sneijder revealed he turned down a move to the Red Devils as he did not want to leave Galatasaray and Champions League football.

And further speculation was sparked in 2016 when the Dutchman said he had met with Jose Mourinho after his former Inter manager took over at United.

To be honest, we kind of miss this rumour.

“I came to watch Lille play Lyon and followed Hazard of course, along with other players,” Alex Ferguson told RMC Sport in 2012. “He is a very good player who has many qualities. He is particularly fast over the first 10 yards.”

That summer, Hazard had the choice of Manchester United, Manchester City or Chelsea, ultimately opting for the latter.

“When they won the Champions League I told myself, ‘Why not Chelsea?’” he said. “There was a struggle between Chelsea and United but, for me, Chelsea has the best project. It’s a wonderful club.”

“There is a borderline in terms of what you would think is a good signing for United,” Ferguson said at the unveiling of United’s alternative to Hazard, Shinji Kagawa. “I see some values on players, like Hazard for instance. To me it was a lot of money. He’s a good player, but £34million?

“What we’re finding anyway, the climate for buying these top players – not just the transfer fees, the salaries, agents’ fees – is just getting ridiculous now. In the Hazard deal, Chelsea paid the agent £6million. The Nasri situation was the same. It’s all about what you think is value for a player.

“I am not envious of those deals at all. We placed a value on Hazard which was well below what they were talking about. So if it doesn’t work well we’re not worried about that. We think we’ve got good value in Kagawa.”

READ: Shinji Kagawa, one of the calmest hat-tricks ever & what could have been

“Toni Kroos had agreed to come to Manchester United with me,” David Moyes told talkSPORT in 2018, referring to the summer of 2013 when he had just replaced Alex Ferguson as manager at Old Trafford.

“I met him and his wife and we agreed it all when he was at Bayern Munich.”

Kroos ultimately decided to stay at Bayern for one more year, leaving Moyes to fail in bids for Cesc Fabregas and Sami Khedira before eventually landing Marouane Fellaini.

We’ll leave you to judge that one.

“Sergio Ramos is determined to leave Real Madrid and join Manchester United this summer, according to sources close to the player,” wrote The Guardian on June 29, 2015.

United were understood to have bid €40million for the defender, whose contract negotiations had stalled at the Bernabeu, while Los Blancos were pursuing David de Gea at the time.

“Manchester United’s pursuit of Sergio Ramos is over, with the Spain defender ready to extend his contract at Real Madrid next week,” wrote The Guardian on August 13, 2015, adding that the Spain international had been told by the club he would not be sold under any circumstances.

Upon the confirmation of his new five-year deal, Ramos said: “I know this renewal has taken a while, but my heart and head have always been with Real Madrid so I couldn’t be happier.”

Sergio Ramos: I could have signed for @ManUtd and I thank them for their offer but I’m happy at Real

United have missed out on so many signings in the Ed Woodward era that we dedicated an entire article just to those – and even that was far from conclusive, with Louis van Gaal alone listing 10 targets he’d passed on to the chief executive that never came to pass.

It’s still happening today and you sense the failure to land Haaland in January 2020 will be used as stick with which to beat Woodward for a long, long time.

The striker had previously worked with Ole Gunnar Solskjaer at Molde and was apparently keen to link up with his former manager at Old Trafford, but United reportedly pulled out of a possible deal due to agent Mino Raiola’s demands, and Haaland took his sensational goalscoring to Borussia Dortmund instead.

2020-09-16
Previous Post: Top Organic Products that You Must Try in 2020
Next Post: Only one person can fix Manchester United now…